Russia will influence activists of the breakaway republic of Ukraine for the investigation of the crash of the Boeing passenger jetliner in the Donetsk region,  Russian President Vladimir Putin promised, opening the meeting of the Security Council in the Kremlin on July 22. Experts have already dubbed the meeting "historical," expecting that the president will make "momentous declarations."

"We are being called to show influence on the militia in the southeast. I repeat, we will certainly do the best we can," said the president.

"One must, in the end, urge the Kiev authorities to respect basic norms of decency and introduce ceasefire regime at least for a short period of investigation," he added.

In the first minutes of his speech, Putin stressed out that Russia would take additional steps to reduce the dependence of the national economy and finance from adverse external factors.

"Mechanisms in the so-called competition on the international arena will be used. This applies both to the economic and political sphere. For this purpose, among other things, opportunities of special services will be used, along with modern information and communication technologies, channels of dependent, handheld, non-governmental organizations - mechanisms of so-called soft power,"  Putin said explaining the need to reduce external influence.

Today's meeting of the Security Council of the Russian Federation, which was announced the day before, started two hours later than was originally scheduled. The meeting started at 3:10 p.m. instead of 1:00 p.m. Prior to the meeting, it was said that it would be devoted to "issues related to ensuring the sovereignty and territorial integrity of the Russian Federation."

"There is no direct military threat, of course, to the sovereignty and territorial integrity of the Russian Federation today. The guarantee to that, above all, is the strategic balance of forces in the world," he said. "What is actually happening? The groups of NATO troops on the territory of East European states have been growing demonstratively, including in the Black and Baltic Seas."

"We need to fully and timely implement all planned measures to strengthen the defense ability, including in the Crimea and Sevastopol, where we have to actually rebuild military infrastructure from scratch."

Putin touched upon problems in the country: "Attempts to destabilize the political situation, one way or another to weaken Russia, to hit vulnerable and problematic areas, are, of course, being taken and will be taken."

According to him, this is done "to make us amendable in solving various problems in the interests of other states on the international arena."

The president also said that the struggle against radicalism in Russia will not be conducted "solely for the purpose of tightening some screws." "We will never walk that path," he said.

The president also expressed confidence that scenarios of "color revolutions" in Russia will not work, although attempts to destabilize the situation from the outside are being made. "Of course, such methods will not work head on in Russia," he said at the meeting of the Security Council. Putin is certain that recipes that can be applicable to weak and failed states, do not work in Russia. "Our people, our citizens, citizens of Russia will not allow this. And they never will," he concluded.

Speaking about international security, Putin said that Russia strictly abides by international law in its commitment to partners. Putin hopes that other countries, military and political alliances should also proceed from this.

Putin promised that Russia will adequately respond to attempts to weaken its position outside the international arena. According to him, such attempts are carried out with the help of special services, "handled NGOs" and other methods.

"We need to adequately respond to these challenges, and most importantly, work systemically, to solve the problems that contain potential risks to the unity of our country and society," said the president of Russia.

At the end of the introductory speech, Putin stressed out that Russia would take additional steps to reduce dependence of the national economy and finance from adverse external factors. "I mean not only volatility on global markets, but also possible political risks," ITAR-TASS quoted Putin as saying.

It is fundamentally important, to take account of the regional factor, he said. "One needs to ensure the priority development of strategically important regions, including the Far East and other areas. Simultaneously, we must seek drastic reduction of gaps between subjects of the Russian Federation, the state of affairs in their economic bases and quality of life," said Putin.

Speaking at a meeting of the Security Council of the Russian Federation, Vladimir Putin said that the Russian authorities plan to rely on the civil society. According to him, it is the civil society that should contribute to the prevention and struggle against radicalism and extremism.

The president set priorities that would guarantee security and sovereignty of Russia. "First - this is gradual work to strengthen inter-ethnic harmony. Competent migration policy. Rigid response to inactivity of officials or offenses that may provoke conflicts on ethnic grounds," Putin said.

"It is imperative that our civil society takes proactive stance, responds to violations of human rights and freedoms, contributes to the prevention of radicalism and extremism," the president said.

He also said that it was "especially important" for the civil society to educate "young people in the spirit of patriotism and responsibility for the fate of the fatherland."

"The language of ultimatums and sanctions is used in the world more and more often, and the concept of state sovereignty is eroded. Objectionable regimes and countries that pursue independent policies or simply stand in the way of someone else's interests are destabilized, - Putin said. - For this purpose, so-called color revolutions, or, if we call a spade a spade - coups are instigated and funded from the outside."

"The focus is put on problems that exist inside countries, but there are always enough problems, especially in fragile states and states with a complex regime." "Often, stakes are made on radical nationalist, or simply a neo-fascist, fundamentalist forces - as it happened in many countries in the former Soviet Union and as it is happening now in Ukraine," he continued.

Speaking of the current leadership of Ukraine, Putin said that it financed the coup. "Yes, after the coup, elections were held, but strangely enough, the people, who either funded or conducted the coup, came to power, and now they are trying to suppress the part of the population that does not agree with this development," Putin said.

Following the introduction, members of the Security Council of the Russian Federation thanked the press, and the meeting continued behind closed doors. 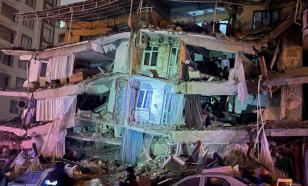