Acting Foreign Minister of Ukraine, Andriy Deshchytsia, no longer exists for Russia, Russia's permanent representative to the UN, Vitaly Churkin said on Monday commenting on public remarks from the Ukrainian diplomat that insulted the Russian administration. "He no longer exists for us. His only function was to translate U.S. instructions into the Ukrainian language. So this is not a great loss," said Vitaly Churkin. 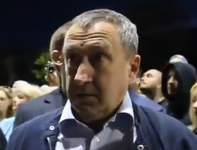 On Saturday, the Russian embassy in Kiev became an object of a barbaric attack. Deshchytsia, who arrived on the scene, released obscene remarks with the use of swear words towards the Russian president.

Russian Foreign Minister Sergei Lavrov said that he had nothing to talk about with  "a character named Deshchytsia." Russia offered the UN Security Council to condemn the attack on the embassy, ​​but the application was not accepted, ITAR-TASS reported.

Vitaly Churkin was surprised that Secretary General Ban Ki-moon did not condemn the attack on the Russian Embassy in Kiev. The diplomat told journalists on Monday after a meeting at the Security Council: "I'm actually a little surprised that the Secretary General has not made such a statement. I hope it's only because he is away, but I will double-check, because in our understanding, every time when such situations occur, the Secretary General should side with international law. So was it in the past," said the Permanent Representative of the Russian Federation.

He also expressed disappointment that the UN Security Council did not condemn the actions of the aggressive crowd either, although the Russian delegation proposed a draft statement for publication. "The text was blocked by the Lithuanian delegation," said Churkin, saying that in accordance with the procedure, such documents are adopted by consensus. According to the diplomat, on Monday, many members of the Security Council expressed regrets that it had not become possible to condemn the attack on the Russian embassy in Kiev. The Permanent Representative of France even called it a mistake. "Obviously, the Lithuanian delegation did not act out of best traditions of the Security Council," said Churkin.

Meanwhile, Jen Psaki, an official spokeswoman for the U.S. State Department, refused to condemn Ukrainian officials for their recent statements. From her perspective, Arseny Yatsenyuk, who called residents of Ukraine's Donbass "subhumans," was simply calling to solve problems in the country. Ukraine's Foreign Minister, Psaki added, swore and called Putin names to appease rioters and prevent an outburst of aggression.

Acting foreign Minister of Ukraine, Andrey Deshchytsia, should get down on his knees and beg forgiveness from Russian President Vladimir Putin for the obscene remarks, Chechen leader Ramzan Kadyrov wrote on his Instagram. According to him, the official "must resign immediately," as he has no other way out.

"The incident shows that the people, who came to power in Kiev, have no idea about politics, diplomacy, ethics and internationally recognized principles of mutual respect between politicians from different countries. Ukrainian officials do not know what state-building, democracy and cooperation is. Even officials of warring countries do not afford such obscene statements," said Kadyrov, RBC reports.

According to him, the Ukrainian authorities should start "every morning with a public apology for his boorish act." "Deshchytsia insulted the entire Russian nation, the entire Great Russia. He will have to answer for that. If he thinks he will get away with it by saying childishly that he was on the same wave with the crowd and would not do it again, then he is deeply mistaken. Vladimir Putin is our national leader, President, Supreme Commander. And you can be sure that there are people to ask questions to him about what he said towards the president and why he did not get down on his knees to beg forgiveness. If Deshchytsia has not realized yet that he should kneel, he will be prompted lucidly to do so," Kadyrov said.

On June 14, hundreds of people came to the building of the Russian embassy in Kiev, smashed several cars and pelted the embassy building with stones. Ukrainian Foreign Minister Andrei Deshchytsia and Interior Minister Arsen Avakov arrived on the scene. Deshchytsa, along with protesters, sang an insulting song about the Russian president. He later explained that he did that in order to appease the crowd.