Recent opinion polls show that Russians believe in their country, in its great future, and this faith has been growing lately. This trend is largely based on the successes of foreign policy of recent times. Naturally, the reunion with the Crimea has played the biggest role at this point. But Russia should not rest on laurels, analysts say. 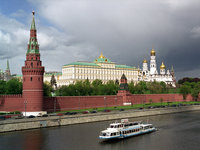 Thus, as shown by relatively recent VTsIOM (All-Russian Public Opinion Research Center) survey, 54 percent of Russians believe that the Russian Federation has great future. In 2003, this point of view was shared by 40 percent of surveyed Russians. Every fifth respondent believes that Russia is already one of the countries that holds a dominant position in the world (in 2003, the share was only 12 percent).

Generally, almost all opinions of sociologists cited in the press are reduced to one general belief: the position of the Russians on this particular issue essentially depends on military and political achievements of the country on the global arena. The aforesaid survey produced such results as a result of the events in the Crimea.

"First, we need to understand what our people see as a great power, - the head of the Institute of Sociology of the RAS, Doctor of Social Sciences Mikhail Chernysh, said in an interview with Pravda.Ru. - I am convinced that respondents, when they answer this question, mean different things. That is, for some, a great power is a projection of military force, for others - an opportunity to show influence on other countries, for someone else - a great power is an economic power ... Great power is a multifaceted concept, and one should have a complete idea of ​​what question exactly respondents were answering to be able to work with this concept."

In general, there are several possible definitions of a great power in the Russian society. A great power can be the power that has incredible economic or military power, strong leadership, or consolidated power, in which the solidarity of people is especially strong.

Here is another variant: a great power is a power of a vast territory that takes over more and more territories. This also may be included in the concept and definition of a great power, so there are a lot of nuances here. But, as sociologist Mikhail Chernysh believes, the people could react, when answering this question, no matter how they understood the notion of great power and what they might mean by this term.

The reactions to most recent events can be especially strong, when Russia demonstrated its ability to be independent, to run independent policy and firmly assert its interests in the international context. The Russians, who participated in this poll, could have that in mind, the sociologist added.

Snowden's case, Syria, the Crimea, the events in Ukraine - in all of that, Russia was, in fact, the only country that was capable of resisting pressure from the United States. In short, such an independent and tough stance impresses people. As a result, people believe that Russia can be an independent and strong country. That is not far from reality at all. But what should a state do, if its people consider it a great power?

"Although there is one administration of the country, one must understand that it presents different interests, departments and directions, - says Mikhail Chernysh. - I think that the main conclusion, which the state should make, is to make the revision of available resources, and take a lot of effort to develop weak spheres of life in Russia. That is, one should distinguish a certain set of vulnerable positions of Russia, where we still lag behind other countries, and achieve success there, just like we did on the international arena."

"First, the pursuit of great power is associated with a change in our attitude to international agreements and treaties that Russia signed under President Medvedev, when we gave away large marine water areas in the Barents Sea and more. Russia was a giver, not a taker, so to speak, - professor, sociologist, director of the Institute of Social Technologies Vladimir Sokolov, said in an interview with Pravda.Ru. - The mentality of the Russian people is its statehood, unlike the Western mentality, in which individualism stands above any statehood and any collectivism. In Russia, people have it under their skin. Whether it's good or bad is a different question, but this is what we have from our ancestors.

So when the state becomes stronger as one, it strengthens people's faith - they believe that the country will be stronger and less dependent on other countries. Ninety-six percent of the Russian population support the reunion with the Crimea, but only two or three percent of the population will feel the benefit of the historic move. All others may face deficiencies due to the fact that, after all, there is a fairly serious attack taking place against Russia. Yet, it is the mentality of the people as the most important value orientation that identifies these figures."

Noteworthy, China, which is rapidly moving towards the status of the world's biggest economy, does not sign any humanitarian and financial international documents. China counts only on its own strength and its own possibilities. This is a peculiarity of the Chinese - they have a completely different mentality.

Russia has long been connected with Europe and America through a multitude of international agreements. But at the same time, we still remember the relatively calm position of the USSR that did not suffer much from global economic and political crises, because it was isolated. This is what Russia is returning to, but, of course, on a new stage, when Russia recognizes only the things that are beneficial for the country, said Vladimir Sokolov.