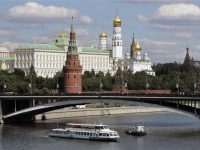 The list also included deputy head of the Kremlin administration Vyacheslav Volodin, Deputy Prime Minister Dmitry Kozak and Russian presidential envoy in the Crimea, Oleg Belaventsev. The sanctions will also affect chairman of the Duma Committee for Foreign Affairs, Alexei Pushkov, head of the Federal Security Service, Yevgeny Murov, and 17 Russian companies. All of these companies are either controlled by Gennady Timchenko, Arkady and Boris Rotenbergs, or bank "Russia." The list of sanctioned companies includes several banks, including Ivestkapitalbank, Sobinbank and SMP Bank.

Earlier on Monday, U.S. President Barack Obama announced the expansion of the sanctions list, although he did not clarify any details about it. Obama noted that Washington would publish more detailed information later during the day.

According to Obama, these measures will not directly affect Russian President Vladimir Putin. The new U.S. sanctions are said to affect Russian-led activity in relation to Ukraine. Obama stated that the United States may expand its sanctions against Russia even further, adding that they can relate to the banking and defense sectors of the Russian economy.

According to the American president, his administration has already succeeded in isolating Russia internationally. Furthermore, the US has managed to mobilize the international community to put pressure on Moscow. Obama believes that this method of influence is more effective than, for example, a move to supply weapons to Ukraine.

Soon after Obama's announcement, it was said that the European Union was also ready to expand its own black list against 15 Russian citizens. For the time being, it goes about individual visa and financial sanctions, although Brussels may impose economic sanctions against several sectors of the Russian economy in the future.

Previously, the U.S. introduced sanctions against 27 Russian officials in March 2014, amid the escalating conflict in Ukraine. Washington officials blamed the Russian Federation for the growing tensions. In particular, the United States considered that Moscow's consent to include the Crimea in the structure of the Russian Federation was a violation of Ukraine's integrity. Noteworthy, the Crimean Peninsula became a part of Russia as a result of the local referendum, in which nearly all residents voted to reunite with Russia (the peninsula was given away to the Ukrainian Soviet Socialist Republic in 1954). Simultaneously, the European Union introduced visa and financial sanctions against 33 Russian officials.

Moscow found the new move of the United States revolting.

"It shows that Washington does not understand anything about what is happening in Ukraine. This is a distorting mirror of foreign policy, rather than a responsible approach to the situation. Every word used in the statement from White House Press Secretary Jay Carney suggests that the U.S. has completely lost the sense of reality and deliberately tries to exacerbate the crisis. In the U.S., they patronage the forces that are not at all ready to take urgent steps in terms of federalization and other measures that should be taken to ensure the recovery of the evolutionary development of this country. The steps that these forces take can only take the country to new clashes. Russia will respond to the US, of course. We are confident that this response will be a painful one for Washington. No one has the right to talk to Russia in the language of sanctions. Attempts to dictate something to us or put ultimatums will come back to those who do it," Sergei Ryabkov, Deputy Foreign Minister of the Russian Federation said, Interfax reports.