For Russia, response to the West is not of paramount importance

On Thursday, a meeting of the Foreign Ministers of the Collective Security Treaty Organization (CSTO) will be hosted in Moscow. The agenda includes issues of regional and international security. 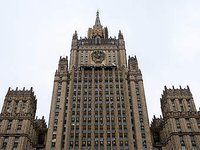 "The foreign ministers will meet in a narrow format, where priority will be given to the situation in the area of CSTO's responsibility and adjacent regions. The agenda of the plenary session includes topical issues of regional and international security and issues of foreign policy coordination of the CSTO member states, as well as the priorities of Russia's presidency in this organization," the Russian Foreign Ministry stated in its comment on the meeting.

"In order to strengthen coordination mechanisms of CSTO, the approval of a plan of consultations of representatives of the CSTO member countries on matters of foreign policy, security and defense in the second half of 2014 - the first half of 2015 is expected, as well as an updated list of the joint statements in 2014. The ministers will approve a number of projects of the Security Council on various activities of the organization," stated the Russian Foreign Ministry.

In Moscow, according to the commentary, the upcoming meeting is seen as an important step towards "further development of allied cooperation in the CSTO."

It can be expected that this issue will be discussed at a meeting in Moscow.

Yet, it would be incorrect to assume that it will be the major topic. The CSTO member states are concerned about the situation in Afghanistan, where presidential elections will be held shortly and from where the NATO troops will be withdrawn.

In addition, the issues of efficiency of functioning of the CSTO have not been fully resolved.

"We need to complete the reform of the organization. So far there are discussions about the CSTO responsibility area, the tools and the implementation of the statutory objectives of the principle of decision-making within the organization. We have to first decide how the currently available format promotes the adoption of important, effective, and quick decisions in this organization," said the director of the Information and Analytical Center for the Study of the post-Soviet space at the MSU - RSUH Alexei Vlasov.

He said that the consensus principle of decision-making shows that in case of threats it is very difficult to make quick decisions. "It is difficult to obtain the consent of each member of this organization. There are no opportunities for operational decision-making," Alexei Vlasov told Pravda.Ru.

Earlier, the CSTO categorically rejected the possibility of any involvement of the organization in the events in Ukraine because this country is not a member of the CSTO.

The CSTO was established in 1992. At this time the organization includes Armenia, Belarus, Kazakhstan, Kyrgyzstan, Russia and Tajikistan.