Can Russia become an alternative to the West?

The West continues to analyze the events of the last few weeks and tries to understand what will happen next. Another recipe came from The Washington Post article, "The Obama administration is underestimating Putin's ambitions." 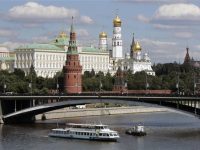 The authors - Molly McKew and Gregory Maniatis - are introduced as experts in the field of foreign policy and strategic communications, who served as advisors to the Government of Georgia in 2008. This fact alone gives one an impression of what the article is about. Indeed, the article is about the containment strategy - this has become a favorite subject in Washington recently, especially among those, who claim to be experts at least at something.

So, former advisors to the Georgian government (whom Mikheil Saakashvili should apparently thank for political failures) believe that the U.S. administration and the U.S. president himself are wrong when they talk about the isolation of Russia. In fact, Vladimir Putin has laid the foundation for the creation of an alternative to the transatlantic alliance.

As long as many countries in the world are not satisfied with the principles, which the West uses in its polices, (India, China, Iran, Venezuela, etc.), the Russian President may offer an alternative, the authors of the article believe.

Russia has been strengthening economic ties with India and China. The authors believe that this cooperation could evolve into a military alliance. In addition, they believe, Moscow has been establishing contacts with the European far-right forces that are quite capable of achieving good results at European Parliamentary elections. This threatens the unity of the European Union.

Needless to say that all of this, from the perspective of former aides of the Georgian government, is very bad. The U.S. administration, as well as its European allies, should prepare for a long confrontation with Russia.

It seems very interesting that the authors of the above-mentioned piece ignore some facts while exaggerating others. That is, if Nigel Faraj, the leader of the UK Independence Party, accuses the European Union of the escalation of the conflict in Ukraine, then this should serve an example of how Moscow cooperates with the ultra. Yet, when State Department officials say that Ukrainian nationalists stepped on the path of changes and gradually mingle into political mainstream, then this is absolutely normal and comes consistent with political norms.

Such hypocrisy has become so commonplace that one pays attention to it automatically. One should pay attention to the strongly negative assessment of an alternative to "the transatlantic alliance." Is there such a process at all?

Deputy Chairman of the Association of Russian Diplomats, Oleg Peresypkin, noted that there are options indeed to create such an alternative.

"There is the BRICS and the Shanghai Cooperation Organization and other organizations. This is not a wholly alternative, but it can be such. These organizations have no armed forces like NATO has, but there is collaboration on other important issues," he told Pravda.Ru.

Senior official at the Center for Arab and Islamic Studies at the Institute of Oriental Studies, Boris Dolgov, believes that now it is only a beginning.

"This is laying the foundation for a possible alternative, and it is too early to talk about its creation and even the first steps," said the expert.

"The question is whether Russia continues to move in this direction. This depends largely on the Russian domestic politics as domestically there are enough forces that will oppose this development. This is quite obvious. It also depends on whether the Russian leadership will have the political will to continue going this way," Boris Dolgov told Pravda.Ru.

According to him, this path for our country is the only possible way. "It is clear that the ruling circles in the West, primarily the United States, will seek to weaken Russia. One should not have any illusions that a compromise is possible," said the expert.

"We have the right to express our point of view, just like other countries do - China, Brazil, India, South Africa, Argentina, etc. All these countries are participants in international relations, and they can, for example, criticize actions of other countries. In this respect, of course, Russia's position on many issues is close to that of other countries," Deputy Director of the Institute of Asian and African Affairs at the Moscow State University, Andrei Karneyev, told Pravda.Ru.

"But we should not portray it as an attempt to create an alliance against someone. On the contrary, this may not be an alliance, but a common position to advocate the principles of international relations that suit the interests of all countries best. That's what Russia's position is about. Now is not the time of the "cold war " when the socialist bloc was opposed to the capitalist one. Everyone should be aware of that," the expert believes.