The large-scale campaign in Western media to discredit the Sochi Olympics has gone hysterical by the middle of the Games. Now Western journalists use all possible ways to criticize anything they can - from bathrooms in the rooms of the Olympic Village to race tracks. Athletes, spectators, politicians, artists often go beyond banal lies to form a negative image of the Sochi Olympic Games in Western countries. However, there are people among competitors, who stand up to defend Russian organizers and try to tell the truth about Sochi to foreign audiences. Will their voices be heard? 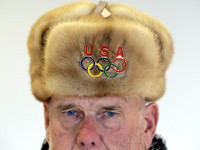 "Problems" in Sochi started long before the opening ceremony of the Olympics. By the time when viewers around the world saw the first minutes of the Games, #SochiProblems had been promoted on the Internet. A hashtag is a brief phrase that allows one to organize messages in social networks. When a person types the phrase in the search box, he or she gets all posts that contain the phrase. The method is recommended for use to organize color revolutions and other large-scale campaigns. In addition to the above-mentioned #SochiProblems, there is another popular hashtag on the net - #SochiFail.

It often happens that Western people blindly add #SochiProblems to their every post so that their message receives as much attention as possible. For example, a Twitter user Sally Jenkins, located in Sochi, posted a picture of a cactus garden in the Olympic of Park. The post comes complete with #SochiProblems. However, there are no problems on the photo: it shows nothing but a flowerbed and some cacti.

"Sochi problems" is a universal code for expressing any thoughts and any information that is related to the Olympics, at least to a certain extent. Bryan Sluys wrote on his Twitter page: "Mark Zuccarello (a hockey player who plays for the American team - Ed.) woke up, saw the Canadian team and immediately went back to bed." The message goes together with #SochiProblems. How can a joke about an American hockey player be related to "problems" in the capital of the Winter Games?

If one believes American users, the weather in Sochi is also a "problem." Steve Cooper, an American stand-up comedian: "Wow! In Russia it is +15 and sunny. Excellent for Spring Olympics."

Jokes about the Winter Olympics in subtropics appeared a few years ago. Yet, why do people treat such things as weather conditions and cacti as "Sochi problems?"

Americans add #SochiProblems to any message just like that, for nothing. The recognizable tag promoted long before the Olympics has become so popular that it absolutely does not matter, whether the message is linked to real problems in the capital city of the Games or not. People want bigger exposure and more likes to their messages. Of course, #SochiProblems would not be so popular if the hashtag did not climb to top ranks in all social networks.

Athletes are also involved in the process to discredit the Games in the eyes of foreigners. One of the most famous provocateurs of the Sochi Olympics is American bobsledder Johnny Quinn. The adventures of Mr. Quinn in Sochi initially aroused sympathy not only at home but also in Russia. After a few days, his adventures in Russia cause nothing but laughter. The bobsledder has not won any medal, but has become one of the most talked-about athletes of the Games. His misadventures began on February 8th. Johnny took a shower and was about to leave, when, according to him, the bathroom door jammed. Without thinking, the well-built bobsledder brutally smashed the door to get out. Quinn posted the photo on the net immediately and woke up a celebrity in the morning. Hundreds of media outlets around the world reported about the incident.

Judging by the athlete's accounts in social networks, Johnny loves public attention. He tweets daily to Twitter, mostly talking about interviews and posting photos from the gym where he often demonstrates his muscled buttocks. On February 10th, Mr. Quinn and a couple of American athletes stuck in an elevator. All media outlets inside and outside Russia learned about the incident at once. Fortunately, Johnny showed mercy on the elevator and was soon rescued from the trap. Bobsledder Steven Langton then tweeted: "We have a meeting of the men's team, and the door is locked. Where is Johnny Quinn, when you need him?"

On February 12, the bobsledder got into trouble again. According to Russian media, Mr. Quinn fell out of the ski lift on his way to the slopes of Roza Khutor ski base. Curiously, the bobsledder was going to ski tracks, as he wanted to see that the tracks were not good for competition.

You may have noticed that Johnny the bobsledder gets into trouble every other day. As soon as people forget about him, he posts something else to attract attention. These messages often play the role of distraction to divert attention from other important information. Mr. Quinn does his job in Russia well. He is even ready to risk his own health, falling off the lift like a superhero and walking through hotel doors only to prove that there can not be anything good at the Winter Games in Sochi.

However, not only Russians, but also members of the American team soon realized that Quinn was a provocateur. Security in Sochi is at the top level, and volunteers and employees are more welcoming and friendly than some Americans are. Here is what another American bobsledder - Dallas Robinson - wrote for Courier-Journal.com: "This is what you need to know: the security, police and military here are very disciplined and very well organized. You can tell they have a mission and it's to protect us at all costs. I will say that I feel unbelievably safe in every Olympic village, venue and yes, even when we are outside of the walls and in town. Believe me, we have explored and tried to go places we cannot ... these guys are good."

"The hundreds, or perhaps thousands, of Russian people we have come in contact with have been unbelievably happy, excited, helpful and downright good to us. If you stand in any one place longer than a minute you will have a rainbow-clothed volunteer rapidly approach you in broken English asking you if they can help you in any way," the athlete also wrote.

Robinson knows what he says, for he was in Sochi one year ago. According to him, the city that he saw now is a lot different from the city he saw a year ago:  'There is a lot of construction still outside the villages and even a bit inside the villages. The hotels, rivers, bridges and towns were all built within the last couple of years. There are three times as many buildings as when I visited last February. They plan to continue to build this region into a flourishing vacation spot for Russian people."

Another bobsledder, Nick Cunningham, stood up for the Olympics. He tweeted: "#SochiProblems is a complete and utter joke. C'mon America, stop being ignorant. Get off the negative bandwagon. #goldenrule #startswithyou."

"It is absolutely gorgeous here. You can tell the effort and hard work that went into everything," he went on. "It's sad and as athletes we see how it actually is here. Everyone is friendly, security is great and amazing accommodations," Cunningham wrote.