Never before have the talks about the upcoming Olympics been so far away from sports and athletes. This is not surprising at all, given that the majority of Western journalists accredited for the Olympic Games in 2014, are preoccupied with nothing but economic issues. They count stray dogs, inspect lawns, hotels and other facilities. Are there Olympic or Economic Games in Sochi? 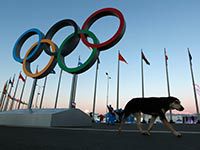 "Global security experts have called this the most dangerous Games ever, based on the location of the competitions, the seriousness of the threats (including one from the head of a terrorist organization who last summer lifted a moratorium on civilian targets), and the capability of terrorist groups to carry out their plans (several in that region already have)," The New York Times wrote.

It was a very, very risky decision for the Olympic Committee to hold the Olympics in Sochi, said Andrew Kuchins, Director and Senior Officer for Russia and Eurasia at the Center for Strategic and International Studies in Washington. He said that many people, including the families of athletes and their friends were too scared to attend the Games. CNN conducted an online poll, at which 57 percent said that the terrorist attack at the Olympics in Sochi "was most likely possible."

In all this hysteria, it has somehow been forgotten that there is nothing new in terrorist threats to the Olympics. The threat of terrorism hangs over every Olympics. Let's remember how Israeli athletes were taken hostage and killed at the Munich Games in 1972. There was a serious terrorist threat over the Olympics in the United States after Sept. 11, 2001.

Noteworthy, at the XXVI Summer Olympics in Atlanta (Georgia, USA) a terrorist attack occurred during mass celebrations in the Olympic Park. The explosion killed 2 people and injured 111. The explosive device was placed into a piece of a metal pipe packed with nails and screws. The terrorist was found in two years.

American officials insist that they had specific reasons to be concerned about security of the Games in Russia. "There are a number of specific threats of varying degrees of reliability that we track," the director of the National Anti-Terrorist Center, Matthew Olsen, said speaking at a White House Intelligence Committee meeting. "And we're working very closely with Russian and our other partners to monitor any visible threats and prevent them."

Are there any reasons for such serious concerns? In London, for example, at the Summer Olympics 2012, the city that also became on object of a terrorist attack in the subway system, unprecedented security measures were taken." Londoners were recommended to leave the city for the time of the games. However, there was media hype about that.

"I'm pretty sure that an attack at the moment of the Games, at Olympic facilities is practically impossible, since unprecedented security measures have been taken. But given the vast territory of our country, such a threat hypothetically exists in other areas, territories, regions. Since acts of suicide bombing in public places are very hard to track down," Alexey Filatov, a retired FSB colonel, veteran of the anti-terrorist group Alpha, a member of combat actions in Chechnya, told Pravda.Ru. According to him, the time of the Olympics is like a piece of cake for terrorists, and their goal is not to kill as many people as possible, but to stir up media controversy. So, of course, those who work against Russia and try to discredit the country, will try to use this opportunity. On the other hand, the concerns the objective, as the Russian Federation has been in the fight against terrorism for years," said the expert.

The above-mentioned CNN poll, in which more than 1,000 Americans participated, also showed that 54 percent of respondents negatively estimate  the activities of President Vladimir Putin, it "it makes him one of the least popular foreign leaders among Americans," the website said. Fifty-five percent of respondents also expressed a negative attitude to Russia. In comparison to 2011, Russia's rating declined, as three years ago, more than a half of respondents treated Russia positively). CNN connected the declining rating with the adoption of the so-called "antigay law" in Russia.

"I think one should not explain this with only this one law, - Andrei Kortunov, CEO of the Russian Council on Foreign Affairs told Pravda.ru. - In the West, especially in the U.S., there are strong stereotypes about the Russian political system, lifestyle and values. The American media and Hollywood actively replicate these stereotypes. But this law and events related to the Magnitsky Act and the law of Dima Yakovlev, the issues related to the activities of NGOs, promoted in the American press, led to the downfall of Russia's rating."

For comparison, a poll conducted by Russia's Public Opinion Foundation in August 2013 said that only 13 percent of Russians had a negative attitude to Barack Obama. According to research conducted by Romir and Leger Market Research, the number was 18 percent in December of 2013.

Why wondering, if negative attitude towards the Russian leader is automatically transferred to the assessment of the Sochi Olympics. For example, Robin Scott-Elliot, a special correspondent for the British newspaper The Independent described the situation in the pre-Olympic Sochi wrote that door handles fall off, there is no light bulbs in rooms and no tap water, but when water runs, it contains something very dangerous.

"A Canadian was told not to wash his face because the water "contains something very dangerous". Others' rooms lacked running water entirely. Or lightbulbs. Door knobs and fridge doors came off in startled hands... The venues are stunning, but around them are fraying edges - and plenty of stray dogs that have avoided heavy-handed attempts to cull them... Around the venues and hotels, trees have been hastily planted and secured with ropes to keep them upright," the article said.

We would like to remind Mr. Scott-Elliot of multiple drawbacks and controversy during the 2012 Summer Olympics in London.

Nevertheless, a few days before the Olympics, opinions changed to opposite. A go-ahead was given, but Russia may not even hope for one.