All eyes on Sochi

Sochi 2014, venue of the XXII Winter Olympic Games from February 7 to 23, slogan Hot. Cool. Yours. Mascots the Leopard, the Hare and the Polar Bear, kicks off on Friday February 7 with a spectacular opening ceremony heralding two weeks of sport, although the snowboard and freestyle skiing events began Thursday. 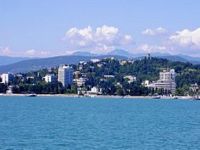 Sochi stands to be an icon of development through sports, as Sochi green standards are applied throughout the Russian Federation, overseen by the Ministry of Natural Resources and the Environment of the Russian Federation, implementing measures to guarantee environmental protection in infrastructures. Cutting-edge buildings at Sochi using green technologies include the Adler Arena, the Bolshoi Ice Dome, the Sochi 2014 Organizing Committee's office building, The IOC Hotel, The RIOU training and administrative building, The Mountain Media Sub-Center, The Mountain Village Chalet, The Swissotel 5* Roza Khutor Resort in the Mountain Village and the «Olympic Park» Hub.

The Sochi Olympic Programme is unprecedented in its scale, housing around 200 different venues with green standards. On a wider scale, the transportation infrastructures of Southern Russia have been renovated.

After Sochi and outside the Olympic Village, the leopard species Panthera pardus ciscaucasica Satunin, or Caucasian leopard, will be reintroduced into the area, a unique experiment in the recovery endangered animal populations, due to the fact that introduction of the leopard alone is not feasible - its prey will also have to be reintroduced. The organisms working in this project are the Ministry of Natural Resources and Environment of the Russian Federation (RF Minprirody), Sochi National Park, Caucasian State Natural Biosphere Reserve, A. N. Severtsov Institute for Problems of Ecology and Evolution of the RAS (Russian Academy of Sciences) and the World Wide Fund for Nature (WWF)

What will Sochi achieve (1)?

The Sochi 2014 Games will not only rejuvenate the city of Sochi, but will also contribute to the economic, cultural and environmental development of the entire Krasnodar Region. They will make it possible to create new standards in ecology, strategy and corporate governance. In other words, Sochi will become an example to other cities of Russia and the world. The Games in Sochi will leave behind an invaluable legacy, whose benefits will be utilized by Russian citizens long after the Games themselves become history.