Putin: 'Attempts to achieve military superiority over Russia will fail' 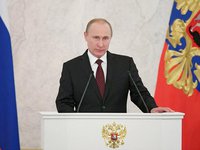 Coming a little late, at 12:03 pm, on December 12, Russian President Vladimir Putin, in the presence of some 1,100 guests, began reading his message to two houses of the parliament of the Russian Federation. Putin delivered his Address to the Federal Assembly in St. George Hall of the Grand Kremlin Palace.

The date of this anniversary event (the 10th one for Putin) was chosen deliberately. Exactly 20 years ago, on 12 December 1993, the Constitution of the Russian Federation was adopted.

Vladimir Putin was reading the Address while standing for 1 hour and 9 minutes. A year ago, it took him one hour and 22 minutes to read the text. For media coverage, 522 Russian and foreign journalists were accredited. The Address to the Federal Assembly was broadcast live on major Russian TV channels and radio stations.

At first, the president congratulated the attendees on the Constitution Day and reminded all that the provisions of the Constitution defining rights and freedoms shall be inviolable, but the law can not be considered dead, as some changes are vital.

According to Putin, "pin-point" corrections of the basic law are possible.

Russian President Vladimir Putin said in his Address to the Federal Assembly that defense companies would be fully loaded with orders; as much as 23 trillion rubles will be allocated for defense spending.

"The funds that we are allocating for the rearmament of the army and navy, to modernize the military-industrial complex, as you know, are unprecedented. The numbers reach 23 trillion rubles. In the next decade, the country's defense companies will be fully loaded with orders and will be able to upgrade their production base and create quality jobs," Putin said.

According to the president, the defense industry employs more than 2 million people, and together with their families, the number reaches 7 million people. "Specialists of this industry will have stable, well-paid jobs, and hence well-to-do families ... I ask the Military Industrial Commission to submit proposals in this regard so that our companies could timely switch to the production that enjoys demand on home and foreign markets of civilian products," concluded the president.

"We are already ahead of many countries in terms of defense," he added. "No one should have any illusions: attempts to achieve military superiority over Russia will fail," he said.

According to Putin, Russia is concerned about the development of new weapons,  including nuclear weapons. " We are closely watching the concept of instant disarming weapons. There is such a concept that is being developed in some countries. The development of such weapons can break all agreements that were previously reached," said the president.

Vladimir Putin also said in his annual address to the Federal Assembly that the 2014 Olympics in Sochi and the 2018 World Cup would be organized at a high level.