The norm of the Russian Constitution that establishes the primacy of international law over the national legislation is causing increasingly more debates. Some say that article 15 of the Constitution of the Russian Federation should remain unchanged. Others say that it is necessary to revise the rule and return the sovereignty of Russia that is suitable for the status of a great power. 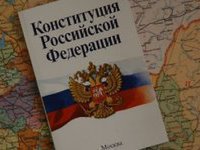 "Generally recognized principles and norms of international law and international treaties of the Russian Federation are a component part of its legal system. If an international treaty of the Russian Federation stipulates other rules than those provided by law, the rules of the international treaty shall apply," says Part 4 of Article 15 of the Constitution of the Russian Federation. The Constitution was adopted at a time when the country was on the brink of a civil war, and to a great extent dependent on financial aid from the West and Western investment. "Russia wanted to integrate in the EU. Credibility of the West in the 1980 -90 was incredible. We've collapsed the USSR with our own hands, made ​​a gift to the West, and waited for an invitation to the civilized world. We were ready to join the EU and NATO, but the West denied us," an independent political analyst Sergei Mikheyev explained Pravda.Ru the situation of those years.

"You know how complex of a historical period early 1990s were for Russia. The country was faced with a dilemma of continuing to live or ceasing to exist, so I think that nobody paid much attention to such details as the primacy of international law over the national law. The fact of accepting the new law was important, there was a newly formed state, so such subtleties were unlikely to be considered,"  told Pravda.Ru the leader of the LDPR faction in the State Duma, member of the state Duma Committee on constitutional Legislation and State Construction Igor Lebedev.

However, those who led the Cold War did pay attention to such "subtleties." In fact, they did everything so that the economic and political crisis in the country provided for the legal dependence of Russia on Western values. The Constitution was written under very tight deadlines, as a rule, by rewriting the entire pieces of international law and national constitutions of the countries that have lost World War Two - Germany, Italy, and Japan, where the international norms prevail over the national legislation. The report of then-Russian President Boris Yeltsin on the draft Constitution of the Russian Federation published in October of 1993 in Rossiyskaya Gazeta stressed that "the project was evaluated abroad."

Thus, Russia in 1993 formalized the defeat in the Cold War, abandoned its superpower status and ceased to be a sovereign country, because in the constitutions of independent countries, and especially superpowers, international standards never legally prevail over the national ones. International standards are not ignored, but are run by domestic legal systems. The U.S. Court in the case of a conflict between international law and domestic statute or precedent will always be guided by the latter. In the UK, the judge has no jurisdiction to apply international law if it does not comply with the national law. In France, if an international obligation contains a clause contrary to the Constitution, the resolution of its ratification or approval may be given only after the revision of the constitution.

A number of deputies of the Russian State Duma are sounding alarm. "There is subordination to the requirements of international legal norms not only on the territory of the Russian Federation as a whole, but also in the constitutions of most of the subjects of the Russian Federation," said Yevgeny Fyodorov, a deputy from "United Russia" faction and a member of the committee on state budget and tax. "For example, 31 of the 46 Russian regions have in their basic laws direct indication of the priority of international law in the territories of these areas. "The country is suffering because of this "heritage,"" said the deputy. He believes that Russia continues to be a non-sovereign state, and "under foreign control Russia cannot develop but is simply degrading." "Increasingly more economic donations in favor of developed countries, and budget restructuring in favor of abandoning social programs are required from Russia because the Central Bank of the Russian Federation is part of the international system.." "In terms of cultural values we are required to embrace values ​​foreign to us - homosexuality, removal of a child from the family, and it is clearly a tool aimed at the elimination of the Russian Federation, its degradation and destruction," said Yevgeny Fyodorov.

He believes that "the nation must unite and decide to change the status of the country to sovereignty by removing external control norms from the Russian Constitution." He is right, because the Constitution has a wonderful article 3: "The only source of power [including legislative] in the Russian Federation shall be its multinational people."

Nevertheless, nothing has changed, because the opinion of those who directly may introduce bills to amend the Constitution is prevailing. "With regard to the need to revise it or leave it unchanged, I do not think it's a question that has relevance today. We have a lot of other issues in the country that require decisions. It is hard to remember when this article of the Constitution caused more or less serious contradictions and conflicts. So there is no need to think about it now," told Pravda.Ru the leader of the LDPR faction in the Duma Igor Lebedev.

Russia began getting out of a severe economic crisis only after it got off the debt needle of the international financial system. There is hope that the main legislators of the country and the Constitution will be inspired by the position of the President of the country. "President Vladimir Putin for the first time a few months ago said that priority should be given to the national law," told Pravda.Ru Vitaly Tretyakov, the editor in chief of the Political Class magazine. "It is silly to crawl under the yoke of foreign law when you call yourself a sovereign state. Now it is understood at the official level, and thank God that it happened. Russia should have a maximum sovereignty, because it is too large to become dependent on anyone, and should arrange its legal institutions as needed, as they are suitable for its purposes, useful and effective. Personally, I welcome all developments in this direction that are happening now, they should be deeper and more specific."