Paul McCartney above law in Russia, because it's Greenpeace!

Another famous person stood up for the activists of Greenpeace, who were detained on Arctic Sunrise ship near Prirazlomnaja oilrig and then placed in a detention center in St. Petersburg. His name is Paul McCartney. On his website, the legendary musician published a letter asking Russian president Vladimir Putin to release the activists. 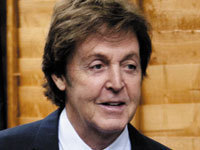 Apparently, it was life experience or someone, whom Sir McCartney personally knows, who advised that  "telephone justice" in Russia was much stronger a force than any law.

The letter - for some reason dated from October 14th, although the Greenpeace activists were detained on October 18th, reads: "Dear Vladimir, I hope this letter finds you well. It is now more than ten years since I played in Red Square, but I still often think about Russia and the Russian people."

Then the musician writes that he wrote the letter because of 28 activists of Greenpeace and two journalists. Paul McCartney wrote that they were not opposed to Russia as a state, and, in general, were a nuisance to the authorities of other countries, not just Russia.

The protest from Greenpeace was peaceful, says Sir Paul. And they are willing to be held accountable, he said. The former Beatle then turns to the Russian president and wonders whether he would intervene in the case and do away with it. Millions of people in dozens of countries would be grateful to Vladimir Putin for that, the musician wrote.

Paul McCartney wrote that he understood that the Russian court and the president were not one and the same thing. But still, he wonders whether the Russian leader could use his influence, whatever it may be, to help the detained activists reunite with their families.

Paul McCartney is not the first one, of course, who turns to Vladimir Putin with a request to use his influence and release the activists of Greenpeace. Previously, a similar request arrived in a letter penned by eleven winners of the Nobel Peace Prize. They were much more simple-minded than Sir McCartney: there were no reservations about the court and the president in that letter.

"In fact, Russia is treated as a totalitarian state, where the all-powerful dictator decides people's fates and where the law does not work," said the head of the political science department of the Higher School of Economics, a member of the Human Rights Council under the President of the Russian Federation, Leonid Polyakov.

"People in the West want to completely ignore the radical changes that our country has experienced in the past 20 years. We are still referred to as a totalitarian state. And thus, among other things, such requests are pushing us to this path. Such requests are clearly outside the normal legal practice of a democratic political system. They may make one believe that one should concede to certain requests, that one needs to respond to the lobbyism of celebrities, such outstanding people, whose requests are above the law," he told Pravda.Ru.

"People, perhaps, sign such letters of good feelings of compassion and humanity, but they do not realize that they aggravate the situation for everyone else," he added.

"Everyone else experience consequences of breaking the law, but then we are offered to consider someone exceptional," said Leonid Polyakov.

He noted that "this is absolutely unacceptable practice." "It seems to me that this type of Western lobbyism on various occasions, either it is Pussy Riot (Paul McCartney called to release the members of the band - ed.) or Greenpeace, should be stopped. I understand that it will not stop. But we should treat all that as unacceptable practice and show no response to that. We should constantly prove to everyone that we are all equal before the law. The more often we have that, the fewer reasons they will have to use this lobbyism," said Leonid Polyakov.