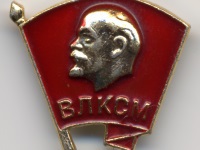 The organization became history with the collapse of the Soviet Union, but people still remember it two decades later. Many successful people in Russia, by and large, came out of the Komsomol organization, including oligarchs, politicians and people of creative professions.

What remains of the Komsomol today? More than just memories that for the most part are good, despite the ideological component. Organizational experience is the Komsomol legacy.

Earlier, even at the final stages of perestroika that destroyed the past, it was said that unions were the school of management, while the Komsomol was the school of patriotic education. There is no clear cut way to describe the Komsomol. On the one hand, it was the school of officials and oligarchs, but on other hand it was a hearth and home for people who love their homeland.

When came the perestroika followed by "market reforms," the Komsomol gathered, grouped, and acknowledged its historic role as completed. In one instance the achievements of previous generations of the Komsomol members who worked for the good of the entire country, for the benefit of future generations and believed that they would live under communism, were privatized. The Komsomol went through the destruction with dignity. Yet, it has not survived the perestroika diluted by dull stagnation. Yesterday's fiery leaders were the first ones to rush to organize "Komsomol" cafes, banks, cooperatives, and video salons funded by Komsomol capital.

It was not the Komsomol that has left; it was we who have leaped away from it when the changes came. Over these leaps we forgot all the good aspects of the Komsomol. And when, by the laws of physics, after each leap we landed painfully on the bumps of the "new Russia," and began to understand the laws of morality. The spiritual "safety cushion" that the Komsomol once provided has disappeared.

The majority of government representatives and authorities are former members of the Komsomol. You are not likely to find anyone among oligarchs who at the time was not in the possession of a Komsomol membership card. The longer the current "big names" worked in the Komsomol, the more successful career they built.

However, this generation is already followed by the next one that only heard about the All-Union Lenin Communist Youth League (and some of its representatives do not even know about it).

The organization started in 1917 with the establishment of the union of socialist workers, peasants and students. But they were divided, and on October 29, 1918, the Russian Communist Youth League (Komsomol) was established. In 1924, the Komsomol was named after Lenin, and in March of 1926 it was renamed the All-Union Leninist Young Communist organization.
According to statistics, in 1977 the League included over 36 million citizens of the Soviet Union at the age of 14-28. It was the largest mass youth organization in the world, and this record still holds.

This is only dry historical information, chronological and factual characteristics of the once mighty organization. To give an emotional, business, and personal assessment of the Komsomol for its birthday, Pravda.Ru asked some famous Russians to speak about it. The opinions varied greatly.

"After the collapse of the Soviet Union young people, the future of the country, were not really engaged. There were very few drug addicts in the Soviet Union. This is because everyone was busy starting from kindergarten. Kids were little Octobrists, then Komsomol, and so on. It's horrible, but all of this was destroyed. Now we have so many drug addicts, so many abandoned children. People do not live well. As soon as Mom and Dad start working, kids run away from their families and have nowhere to go."

Vice -President of the Russian Academy of Sciences Sergei Aldoshin:

"It is difficult to provide an unambiguous answer to this question. There were good moments and there were purely formal ones, as it often happens in our lives.

Yet, positive aspects have prevailed. This organization facilitated the development of patriotism, gave impetus to a normal, healthy career growth, that is, it helped young people to find a foothold in life.

Although many of the activities were just a formality, sometimes in our lives we cannot say whether something is good or bad. The truth is always somewhere in the middle. My memories of the Komsomol organization are those of romantic youth, my school and university years. I actually did not remember that October 29 is the birthday of the Komsomol organization. Thank you for reminding me!"

A People's Artist of the USSR Elina Bystritskaya:

"It is my nature that I cannot agree with anything or anyone. I have my own opinion. I joined the Komsomol in the army, during the war. I do not understand how one could think something bad of it, at the time no one thought of it. There were good songs about the Komsomol. My mom was a member at some point.

I think that organizations are a must in certain age, in order for people to know why they work and what they want. I think the Komsomol provided good knowledge in that sense, and helped to start life. Otherwise, we would not have built so many things."

"This is a global issue. The Komsomol was originally created as an amateur organization. It was created from the bottom, but with the support from the top, first of all, to make this organization a combat reserve and the assistant of the Bolshevik Party.

It seems to me that the mobilizing role of the Komsomol has been associated not only with the party; it was associated with all the values of our life, the Soviet life. There were a lot of good things in it.

Now we have a problem with value orientations. What are the goals now, on what basis should we be building youth organizations? We had perestroika; we had the early post- perestroika times when there was an attempt to somehow build a youth policy. Now we cannot build such a strong bottom-up youth organization.

We can argue whether it was good or bad, but as we can see, neither youth nor the society can live without ideology. Otherwise, there are fluctuations, up to radical use of energy, different ideologies or other ideas. But at the same time, I want to say that the Komsomol as an organization had travelled the entire tragic path through the entire Soviet period with the country. It is a system, as any organization works as a system.

I have a positive view of the Komsomol. You can often hear the word "formalism" used in relation to the Komsomol. I do not have such an experience. When I was to join the Komsomol, I was after a surgery, on crutches. My entire class went to the Komsomol committee, and the committee sent Commissioners of the District Committee to my house. This was in 1965, and I was accepted without any formalities.

"I was a member of the Komsomol in the late 1980s, on the decline of the Soviet regime. Indeed, there was a certain feeling of bureaucratization and alienation from the needs of young people. There was some kind of ideological litter.

But today, looking from a distance on the historic role of the Komsomol, I believe that the organization was important, necessary, and we could use something like this now. There is a lack of systematic work with youth sports organizations, a uniting youth structure. I think it is necessary. I generally have positive feelings about the Komsomol and its role in my life.

Of course, young people now are not striving to be astronauts and explorers. Now young people usually dream of becoming officials and measure success with money. Although, this was also imposed on them. This primitive materialism that is dominant now is the pursuit of the usual material things and nothing else. People are already bored of it and are longing for changes. Therefore the concept of the Komsomol will now be in demand, or may soon be.

Chairman of the Board of Directors of "Dymov" company Vadim Dymov:

"I think that the Komsomol played a very important role at the time, and was completely adequate for that time. It was playing the role of a junior division of the CPSU, so to speak. It prepared young people, somewhere it was even brainwashing so people would have fewer doubts in the future and spend more time working for the benefit of the Soviet state and the Soviet people.

In this organization there were no individuals. People were only a part of the organization. And this was a weakness in my opinion.

Has it achieved its goal? Yes, it has. At the right time people could be mobilized and really inspired. In moments the country needed it (war, construction, and so on), the Komsomol fulfilled its task.

Now, in my opinion, it is no longer relevant because now the country is facing other problems.

I see the future without the Komsomol despite the fact that I was a member. Generally I have nothing bad to say about it.

But the Young Communist League as part of this entire socialist ideology, Soviet ideology, the system, has failed. Why do we think about the past and trying to catch hold of something if we understand that it will never happen again? We must find new meaning for the future, we must look for new models, we have to inspire people for tasks the country is facing.

If Russia has declared itself as a world leader in the economy, we still need young economists, young entrepreneurs, that's what we need. We need people with an open mind, people who can take personal responsibility instead of acting within organizations such as the Communist Party or the Komsomol. The world has changed."