While in the West hundreds of thousands of demonstrators are protesting against the wide spread of genetically modified foods, Russia has taken a complex stance in relation to GMOs. On the one hand, the Russian President is hinting at the possibility of a total ban of such products, while on the other hand Russia has ratified international agreements that do not allow such bans. 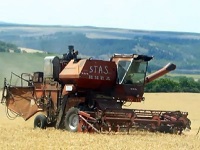 Meanwhile, a clear legislative framework for the definition of acceptability of GMO products in the country can directly affect the state of Russia's agro-industrial complex suffering the consequences of the country's accession to the WTO.

Last weekend, protest marches against the spread of genetically modified products and their manufacturers were held in fifty countries. Particular anger of hundreds of thousands of protesters was directed against one of the biggest players in this market, the Monsanto Corporation. It is not surprising. In addition to large amounts of seeds of genetically modified corn, soybeans and cotton, this leader of bioengineering produces herbicides, fertilizers, and growth hormone for animals that advocates of clean food do not approve.

At first glance, the situation seems paradoxical. For nearly its entire history mankind has dreamed of high-yielding, disease and pest-free crops. Now, when biotechnology provided this opportunity, suddenly there are plenty of people who are unhappy. Opponents of GMOs contrast obvious economic benefits with a number of concerns ranging from direct harmful effects on human and animal health to a hypothetical risk of unpredictable formation of features in microorganisms harmful for humans and animals.

Proponents of GMOs respond with an argument to these concerns: there is no "objective" data about the dangers of such products (obviously, they refuse to recognize the objectivity of the arguments put forward by their opponents). They argue that the history of genetically modified organisms is too short to draw global conclusions. In this philosophy lies a considerable danger because when all the side effects of these technologies manifest, it may be too late.

However, with regard to Russia and Russian agriculture there are quite specific, easily measured in tons and rubles facts that make us pay close attention to the issue of GMOs. Russia is far behind the developed countries in the implementation of biotechnology, and this is a problem. However, at the same time this lag provides good chances for the Russian agriculture.

The lag in biotechnology means that the Russian agricultural industry that is already under severe conditions is forced to compete with a significant inflow of cheap agricultural products from the West. One may hurry to catch up with the leaders, but there are other traps. The world's producers of genetically modified seeds will enthusiastically rush into the Russian market, but the trick is that, for example, they sell seeds that can only be used once. After harvesting, these plants cease to proliferate. What would happen if for some reason seed suppliers stop selling to Russian farmers?

Development of domestic biotechnology is certainly necessary. However, considering the risks associated with genetically modified food, there should be no rush in this direction. What should be done now? There is not that much room for maneuver. Under the terms of the WTO the Russian market should be open for GMO-containing foods, and consumers should be warned about whether or not the presence of these additives in the product depends on the willingness of the manufacturer.

The situation is so serious that, summing up the meeting on socio-economic development held in September in the Rostov region, President Putin instructed the Cabinet to tighten control over the circulation of GMO-containing products including the possibility of a total ban in Russia. Recently, during a press conference that took place before the industry forum "Golden Autumn - 2013" Russian Agriculture Minister Nikolai Fyodorov said that "Russia will focus on international experience, including the experience of the European Union that allows GMOs, but regulates its use in a way that these measures can be called almost prohibitive."

According to the Minister, "prospects for Russia will be strategically successful if we maintain ecological agriculture in Russia." Branding of Russian agricultural products as environmentally friendly can be a marketing advantage of the Russian food.

"Indeed, Russia has a unique opportunity to occupy a niche as a global manufacturer of environmentally friendly agricultural products," said an expert consultant of the Public Chamber of the Russian Federation Olga Rasbash. "We have tremendous resources of 40 million hectares of land that has not been subjected to chemicals for a long time, and another 3 million hectares lie fallow or are simply abandoned. The introduction of organic farming on these lands would bring the country great benefits. In particular, according to experts, by 2020 Russia will be able to occupy over 15 percent of the global market of environmentally friendly agricultural products that by that time will increase to 200-250 billions of dollars.

According to a representative of the Public Chamber, a focus on organic farming not only promises direct economic benefits, but also will be able to give life back to the abandoned Russian villages. Organic farming will ensure the development of small and medium-sized businesses, and will provide the villagers with well-paid jobs and will keep young people in their home lands.

But to do this, as Olga Rasbash explained in an interview with Pravda.Ru, more should be done than a simple ban on the use of GMOs in agriculture and food industry. "This would require an entire set of laws, first of all, technical regulations for organic agricultural products, the national quality standard of environmental friendly products, laws on organic farming, soil protection, a law on protection of genetic resources, and so on. In addition, the state control has to be tightened and new principles of expertise and product labeling should be introduced allowing differentiating the degree of harm and healthfulness for individuals. A possibility of social control based on the best international practices in the field of food security should be introduced," the expert explained.

"These fears are exaggerated," said Olga Rasbash. "Experts estimate that the unit cost of production of environmentally- friendly products in Russia can be comparable to, or higher than average by 10-40 percent. Our experience shows that, even now, without the creation of special conditions many regions are trying to implement the principles of organic farming, at least partially. As for the concerns that eco-friendly products will not be affordable to most citizens of Russia, no one says that all foods should be organic. It would be sufficient to spread the principles of organic farming to 30-35 percent of the agricultural land, and the rest can be used for conventional production, of course, without genetically modified organisms."

According to Olga Rasbash, in Russia there is hope that the arguments of the opponents of GMOs will be heard. In addition to the fact that some regions take independent steps to protect local farmers from unfair competition (and protect consumers from dubious GMO-products), the State Duma may consider the bill on organic agriculture during this fall session.

Finally, here is some history of the Monsanto Corporation. The company was founded in 1901. It became famous during the American war in Vietnam as the main supplier of defoliants (chemicals that the U.S. military sprayed over jungles to cause abscission of foliage). Later it was revealed that these reagents cause cancer, and the company had to pay $180 million in compensation to the veterans of the Vietnam War.

During the same period, the corporation was the first in the world to manufacture plastic bottles for soft drinks. Soon, it became clear that they were not safe for health and the Office of Food and Drug Administration banned their U.S. production. The company is constantly mentioned as a defendant in claims for damage to health. Last year alone Monsanto has spent about $ 6 million on lobbying in Congress and U.S. government agencies, which eventually led to the adoption of "Law for the Protection of Monsanto" that protects biotech companies from lawsuits related to the production and sale of GM seeds.

Now this "good doer" set out to build a large enterprise in Ukraine for the production of genetically modified corn seeds. It is obvious that this production will be focused not only on Ukraine and Europe (the latter, incidentally, already has enough of this production). If this is the consequences of the choice of the "European path" we can only sympathize with our western neighbors and hope that Russian legislators and the executive branch will not delay the protection of Russian fields and health from the GMO grace.