What Putin has done for Russia and world at 61

Russian President Vladimir Putin celebrated his 61st birthday on October 7th. Pravda.Ru talked to political scientists asking what actions of the Russian leader in the domestic and foreign policy during his tenure as President they find most successful. 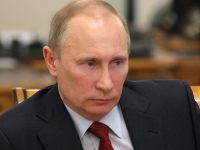 "I would pick one of major decisions achievements in domestic and foreign policy for each term.

"During Putin's presidency in 2000-2004, a key decision was to restore order in Chechnya, the decision to completely eradicate intervention of the international terrorism in this country, to return Chechnya in the Russian constitutional legal field.
This required a very serious courage and will, determination, because a sufficiently large part of the Russian elite did not want to go there and talked about the need to continue useless negotiations.

"I remember that period of late 1999 - early 2000 's very well. Putin has undertaken the responsibility to eradicate terrorism and separatism with an iron hand. He has succeeded.

"During the same period, in terms of foreign policy I would point out quite a bold decision at the time to resist the U.S. and its allies in beginning the intervention against Iraq. Then under the pretext of searching for weapons of mass destruction the U.S. forces have destroyed a sovereign state that is still in a state of all-out civil war. This state, in fact, has ceased to exist.

"During the second term, I would mention two more decisions in domestic and foreign policy. In the domestic policy the decision to create a stabilization fund turned out to be very far-sighted. He took advantage of good market conditions in the energy market, and created a reserve for a day when we had to worry about the global crisis along with the global market.

"In 2008-2009 this was exactly what happened. Only thanks to a significant "safety cushion" we were able to avoid the most severe, catastrophic consequences for the Russian economy and, consequently, the entire social sector.

"In foreign policy I remember from that period a consistently hard line on defending Russian sovereignty, the doctrine of sovereign democracy. Putin did not use this term, but actually enforced it. This was indicated in his Munich speech in February of 2007. For the first time he clearly outlined for the West a set of issues, the promises made at the time to the USSR and Russia, and what has actually happened. I think it was a very bold and memorable step.

"As for the third term, here I would mention two events. In terms of the domestic policy I think the main thing was that Putin has succeeded in the course of the election campaign clearly presenting to the Russian public a national development strategy set out in seven articles. He then clearly formulated it in his May decrees after his inauguration in 2012. This is a clear and distinct program, a step by step plan for Russia that has become the basis for the government under the control of the President. I think this is a very important achievement for the moment. There is a plan, and this is a benchmarking mechanism for the specific work of the executive authorities.

"As for the foreign policy background, I think we can all agree that this is the Russian position on the situation in Syria and the initiative of Vladimir Putin for the control of chemical weapons in Syria. In fact, it has led Russia out of the deadlock when it seemed that the intervention against Syria was almost inevitable, when the U.S. was on the verge of getting involved in another conflict. Putin's proposal, in fact, made ​​it possible for Obama to save face and thereby save the Middle East region from a full-scale war. At the moment it is still working, and that's very important."

President of the Institute of National Strategy Mikhail Remizov:

"In the area of domestic policy I believe the most important achievement is the increase of the rate of the natural rent for oligarchic large businesses that occurred in the initial period of the reign of President Putin. It was expressed in the taxation mode and has generally improved tax collection. This has made the state more capable. This is the foundation of a capable state. It still leaves much to be desired, but some important steps have been made in this area.

"Perhaps, the centralization of power and the cessation of regional freedom can be called a historically necessary change at the time. This also includes the reform of the Federation Council, the establishment of federal districts, bringing regional legislation in conformity with the federal legislation, etc.

"With regard to foreign policy, I think I would call the formation of the Customs Union of Russia, Belarus and Kazakhstan. This success is local, but absolutely real.

"We can talk about the image-winning steps in the international arena such as the Syrian issue. But from the point of view of real interests of the country the formation of the Customs Union is the number one event of foreign policy during the period of Putin's rule. Although it took place during the presidency of Dmitry Medvedev, the foundations were laid during Putin's presidency and in many ways the real work was done at the government level."

Chief Researcher of the Institute of International Economic and Political Studies with the Russian Academy of Sciences Alexander Tsipko:

"The first important achievement, of course, was restoration of Russia's territorial integrity, the victorious second Chechen war that allowed restoring our historic positions in the Northern Caucasus. At the same time the decision to appoint Akhmat Kadyrov head of the Chechen State was genius. This is despite the fact that Kadyrov in the times of Dudayev and Basayev was in the opposition and was its spiritual leader. I think it was an extremely important decision that has led to the final restoration of the territorial integrity.

"The second important decision was that Putin in 2003 has achieved, despite tough resistance of Khodorkovsky, adoption of the law on mineral resources. Without this law, the growth in oil prices would not have yielded any results. So when liberals say that Putin gets no credit for it and it has to do only with world prices, it's a lie, because if it hadn't been for the law on mineral resources, it would have been the same situation as in the 1990's. All proceeds from the oil would have landed in the offshore and foreign banks. Only because of this tax we can control the price of oil. Putin has solved the main problem that is being solved in all civilized countries. He returned the rent for the resource to the state.

"Another achievement is restoration of Russia's independence and sovereignty in the international arena.

"Putin has rehabilitated Russian patriotism. Do not forget that before Putin media under Yeltsin led people to believe that patriotism was the last refuge of scoundrels. At least, all TV channels were telling it. It was very important for me because I started the rehabilitation of patriotism back in 1990 and have lost a number of positions and even my deputy status.

"A consistent social policy is very important. Of course, there are consequences to these developments, but, nevertheless, it is extremely important.

"Putin has not only taken the commanding heights of the economy due to natural resources rents, but also took the political heights. Under Yeltsin, Berezovsky and the rest kicked open the door to the Kremlin; they would enter and dictate to Yeltsin. For a long time, especially after 1996, Yeltsin remained under the rule of the oligarchs. Putin has freed us from the power of the oligarchs.

"Objectively, you can dislike Putin, but to be honest, this is a historical figure that will forever remain in the history of Russia."