International Aviation and Space Salon MAKS- 2013 was conducted on the airfield in the town of Zhukovsky, near Moscow, from August 27 to September 1. We asked special correspondent of Aviapanorama magazine, Yevgeny Matveyev, to share his impressions of the event. 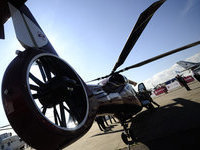 How would you estimate the air show from the point of view of a specialist in the field of helicopters?

"I got contradictory impressions. On the one hand, there are very good positive changes that touch upon the appearance, content, quality, etc. But as far as the depth is concerned, the changes that we can witness in our country, they do not correspond either to the expectations of society, or the injections of funds that the helicopter-making industry receives today. The society believes that we invest money and we need to get more."

"Has MAKS lived up to your expectations of an expert?"

"At the air show, there were helicopters of four groups presented: the group of the Russian Air Force, military helicopters, products of our major developer and manufacturer - Helicopters of Russia. The first foreign manufacturer was very impressive at the show - Augusto Westland. The company presented the full range of its products. The heaviest helicopter was displayed in the VIP-version. Finally, the fourth monopoly was Motor Sich. This all means that MAKS has become less democratic. Smaller producers are being forced out of the field, leaving only larger ones. This is the first thesis.

"The international sector has been developing very fast recently. Already today, it can be seen from the contracts and statements that Helicopters of Russia make today that the Russian company has been getting closer and closer to Augusto Westland. The trend is obvious. The signed agreements on international cooperation leave a very good impression, but they are designed to secure the presence of foreign helicopters in Russia.

"It goes about service centers, joint development, support for engines, etc. Thus, it seems that there is no reverse movement, or there is, but the sprouts of it are very small. Western technologies are moving towards Russia, but the transfer of technology and the movement of Russian helicopters to Western countries is very insignificant. We are being used as a market, not as partners."

"What is the situation with new domestic technologies?"

"Our technologies develop very slowly. Essentially, all of the so -called "new products" that were displayed at MAKS air show arrived there on trailers. In other words, they were "new" in 2011 - two years ago they were called new products of the air show, and now they are called "new" again. The development itself has slowed down. There are new developments , but the pace is very slow. Putin talks about the state support for the helicopter-making industry, he talks about the financial support for the industry. The society has a right to ask: what have you done so far? There must be some sort of responsibility for development. Russia sells it helicopters to oil companies, the USA buys our helicopters for Afghanistan. These and some other sales channels create the favorable atmosphere that allows us to say that all is ok in the industry. We must quickly grasp market mechanisms and develop faster."

"Were there any major contracts signed?"

"As for the big major sales contacts, there were few of them. One of the reasons, in my opinion, is the fact that we have two major exhibitions a year. The International Helicopter Industry Exhibition HeliRussia took place in May. Three months later, MAKS was held. Two large exhibitions for the helicopter industry is too much. In my opinion, they should be separated and held every other year, for example. Companies would have more time to get ready, and people would be more curious and hungry for new products.