Every fifth Russian has employment problems

Citing various studies of the labor market, analysts assure that Russia does not suffer from unemployment. However, these studies show surprisingly disproportionate numbers. Rosstat reported four million unemployed, while the Ministry of Labor stated there were 980,000 of those, a record low number in the history of the Russian Federation. What results are most reflective of the real situation?

At the time when in the countries of southern Europe unemployment among the working population has reached 25 percent, in Russia this number is only 5.4 percent. It would seem that the numbers are clearly in favor of Russia. However, if we dig deeper it becomes clear that the situation in the labor market of the Russian Federation is not as rosy as it seems at first glance. 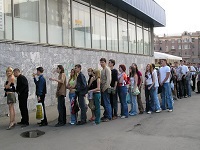 Earlier this week, the Ministry of Labor published the data stating that only 980,000 Russian citizens receive unemployment benefits. The officials particularly stressed that this was the lowest number since the emergence of the Russian Federation as it has never been below one million, Komsomolskaya Pravda reported. However, in reality there are no reasons to celebrate even a small victory over unemployment in Russia.

"From the point of view of an average citizen, even in my circle I see that one in five or six people have problems with employment," deputy chairman of the Duma Committee on Labor, Social Policy and Veterans Affairs Elena Afanasieva told Pravda.ru. "There is simple statistics. Of course, the number of one million looks good. Despite the demographic crisis, there are over 140 million people in Russia, and if we were to remove children and people of retirement age, this number looks really good. But in fact, I believe that it is not reflective of the reality. We have to pay attention to the official statistics and not to neglect in an attempt to make the situation look attractive. "

The number identified by the representatives of the Ministry of Labor is just a drop in the sea, because it is based on the number of citizens who are registered as unemployed, which allows them to receive benefits that are not as popular in Russia as they are in the West. As sad and surprising this may be, only a small number of unemployed citizens turn to the government for help. The reasons for ignoring employment agencies vary depending on the place of residence of unemployed Russians.

"Some do not work and do not get registered, some do get registered, but work and get paid under the table. How can we identify the real unemployed and people who do have a job, but earn "black wages"? To date, the government does not have a clear mechanism for tracking and calculating the number of such people," Elena Afanasyeva said.

According to the deputy, some Russians do not get registered with employment agencies because they get some temporary jobs, including seasonal. These people could have received unemployment benefits during periods when they do not make a living, but they do not give themselves this chance. "There is certain sloppiness in people who do not have jobs," Afanasyeva said. This applies mainly to people living in small towns and rural areas. Life in the remote areas of the country seems hopeless for many Russians and it is easier for them to give up on themselves and their future than look for a job and get registered with an employment agency. This problem is even not so much of the economic but public and social nature, however, it interferes with measuring the precise number of unemployed people in Russia.

Another obstacle to the accuracy of the scale of the problem are the citizens who get paid under the table but register as unemployed, increasing their income. It turns out that even the number suggested by the Federal State Statistics Service, according to which the country has four million unemployed is very conditional. This number, however, looks more realistic, especially given the new legislative realities.

"We are faced with a problem that in the last year even sole proprietors began shutting down their businesses due to the introduction of the tax on future pensions," said the deputy. "Different numbers were named in the committee. For example, the executive authorities said that 500,000 jobs were eliminated, while others said that a million of private enterprises were shut down. "

Today the problem of employment is relevant not only for women and men over the age of 35-40, but also the Russians outside of the so-called risk group. Even though the national unemployment rate is lower in comparison with the crisis year of 2009 when Russia had 2.3 million officially registered unemployed, we should be realistic about the situation. The executive branch should act from the point of view of the worst case scenario not to let the problem get worse.