During the Cold War, the Mediterranean was the most important area of ​​strategic struggle between the West and the USSR. Many years have passed, a lot has happened, but the importance of the Mediterranean Sea has remained the same. Russia, a successor of the USSR, has lost some of its influence in the region over the years. It appears, though, that the country is not going to sit on its hands watching others taking its place under the Mediterranean sun. 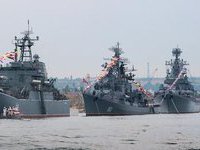 According to the press service of the Defense Ministry of Russia, the Russian naval task force in the Mediterranean will include about ten ships of various classes of the North, Baltic and Black Sea fleets on a rotational basis. Depending on tasks, the number of warships in the compound can be increased.

During the Soviet period (1967-1992), the Soviet Union had the 5th Mediterranean squadron of naval ships operating in the Mediterranean Sea - 30-50 ships. The squadron was created to deal with "cold war" problems in the region.

Within the structure of the Mediterranean compound, Russia plans to have about a dozen ships and submarines. Mistral helicopter carriers that Russia purchased from France can also be involved in the project.

The headquarters for the new compound will be created this summer. Most likely, Russia's group of the Naval Fleet in the Mediterranean will be commanded from Sevastopol. It was also said that the compound would be used to solve problems in the Indian and Atlantic oceans, if required and needed.

The French Mistrals may become the command ship of the compound (Russia is expected to receive the first vessel from France in 2015).

The ships of this class have ample opportunities for long-term command operations at sea. In general, the Russian Navy, until the end of 2020, will receive  54 surface ships and 24 submarines.

Why does Russia need the Mediterranean fleet?

Many experts attribute this to the situation around Syria. In fact, there are plenty of reasons.

Russia has to take account of the danger of U.S. military intervention in the internal affairs of Syria - Russia's ally in the Middle East. At the end of 2012, the Russian fleet forced a group of American aircraft carriers out from the coastal waters of Syria. The operation was officially called the "exercise", but the result of that exercise was the return of CVN-69 Eisenhower aircraft carrier to its base in Norfolk.

Rumors about a possible attack on Syria from the United States continue to emerge. This brings up a question of whether the Russian Federation needs to send its forces to the Mediterranean every time a U.S. aircraft carrier appears there.

First off, such monthly missions waste resources of the ships, not to mention the fact that they require significant funding. It was therefore decided to deploy Russian ships in the Mediterranean region on a regular basis. With their help, it will be easier for Russia to defend its interests in the Middle East. Thus, the Russian Defense Ministry has solved the problem of financing "military drills" in the Mediterranean. The ships will most likely be deployed in the port of Tartus.

One should bear in mind the fact that during the recent years, the Russian Navy began to develop rapidly. The Soviet Union used to have enormous influence on the Middle East. Modern Russia has its own interests, and, of course, it will be defending them. The deployment of Russian ships in the Mediterranean Sea is the beginning of a new concept of the Russian foreign policy.

In addition, the military and political situation in the world has been escalating, and Russia simply needs to have its armed forces present in certain key regions of the globe. This will give Russia an opportunity to feel more secure. Of course, it goes about the obvious military confrontation with the navy of the United States and NATO, but the very presence of the Russian Navy in this region can be a decisive factor in making certain strategic decisions.

Problems for the creation of the Mediterranean Fleet

Creating the Mediterranean fleet is a very difficult and long process that requires great effort in solving various problems. Admiral Viktor Kravchenko, former head of the General Staff of the Navy, is skeptical about the establishment of the Mediterranean Fleet. In his view, the current state of affairs in the Russian army will not let the country collect ten ships for the new squadron. This is nothing but wishful thinking, the admiral believes.

Northern, Baltic and Black fleets can provide the maximum of one or two combat-capable vessels, the admiral said. If formed, the group of such vessels will have their resources exhausted in just a year; repairs will be required afterwards.

Creating a Mediterranean squadron will require locations for its deployment. A naval base in Tartus, Syria, will have to be reconstructed, which is a long process. Rumor has it that the Russian Federation has offered financial assistance to Cyprus in exchange for an army base.

The whole point of creating such a squadron will be lost in case the Americans overthrow Assad. Should this be the case, the presence of the Russian fleet in the Mediterranean will be pointless. The main goal of the Russian naval group in the region is to protect independent states in the region from U.S. military intervention. This is exactly the reason why Russia wants to create its fleet in the Mediterranean Sea.