Crackdown on Russia's civil society after Putin's return to the Presidency 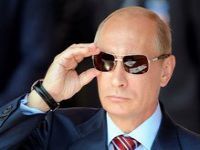 Human Rights Watch and Amnesty International who watched NATO kill 50,000 blacks, women and children in Libya are agitating because the laws passed by the Russian Duma interfere in the work of nongovernmental organizations (NGOs), seeks to cast government critics as clandestine enemies, thereby threatening the viability of Russia's civil society.

The new laws "clearly seek to limit, or even end, independent advocacy and other NGO work by placing new, draconian limits on association with foreigners and foreign funding".

The new law regulating NGOs, requires, among other things, organizations that receive foreign funding and supposedly engage in political activities to register as foreign agents.

To make a comparison (we are so Western-centric), if North Korea and Iran sponsored an NGO in the vicinity of the Deutscher Bundestag for the purpose of "political activities" then this would not be a problem? Would they be allowed "freedom"?

Perhaps NATO have a better Human Rights track record than these countries then? In my opinion the comparison is not unfair. Iran has not killed more than a million children as NATO did in Iraq.

I find it amusing that curtailing the activities of politically motivated, Washington funded organisations in Russia threatens the viability of civil society (individuals). That's not an honest statement now is it? Nor is describing Washington funded NGOs as "independent".

It looks to me that http://www.usaid.gov/ is in fact a government organisation not an NGO. It just happens to be the government which has interfered the most in foreign countries, usually to steal their resources.

Don't forget that Putin jailed Khodorkovsky, one of the many Oligarchs who had raped Russia's resources after Glasnost, nationalised his oil and gas fields and paid off the debts of the Russian Federation in 5 years. Just before his arrest Khodorkovsky wired all his money to Jacob Rothschild who runs the corrupt City of London, without proper financial regulation, so that 60% of the UK GDP is fraud. Is that who you worked for Mikhail?

Even the US is (was?) so much better regulated, that Fanny Mae and all those scandals had to pass through the City of London. What was the result? Is this the world we want? Putin started seriously cleaning up that aspect of the Russian mess, but we are still at the mercy of the financial terrorism of the one percent and the Rentier Class. Germany recently was behind a move to steal bank deposits of Cypriot citizens.

A business associate told me that his friend in the UK recently got a mortgage at 3%. This is what caused the debt problem in the first place. House prices continue to rise well above what a family can afford and the accrued debt continues to increase. I believe that the UK recently was given a warning regarding the debt levels.

Back to "Laws of Attrition - Crackdown on Russia's Civil Society after Putin's Return to the Presidency".

"The United Nations Committee Against Torture, for example, said the law could be interpreted as prohibiting the sharing of information on the human rights situation in the Russian Federation with the UN".

Well close down Guantanamo jail then, if you ever do anything but talk.

"Russia's Constitutional Court ruled that several of the law's provisions were unconstitutional, and the Venice Commission of the Council of Europe found that the amendments represent "a step backward for the protection of freedom of assembly" and urged Russia to repeal or revise key provisions."

The Russian Constitutional Court would like to see lower fines against individuals contravening the new protest laws. What about the Council of Europe?

Funny then that according to the Daily Mail, Britain is set to pull out of the "discredited European Convention on Human Rights that has allowed dangerous criminals and hate preachers to remain in the UK". Same problem as in Russia perhaps?

When an advisory body passes a judgement, find out more about them. When you visit an "NGO" website check out the directors and patrons. USAID was one that I remember Putin had issue with.

So we see for example that the administrator had worked for the Bill and Melinda Gates Foundation. What sort of things are they into?

In 2011 alone, the Bill and Melinda Gates' polio vaccine campaign in India caused 47,500 cases of paralysis and death.

Bill Gates pushes Big Pharma who are involved in endless scandals in third world countries. It appears that the Council of Europe regulates Big Pharma or more like it, gives them a carte blanche to implement faulty breast implants. Their role in Europe must be similar to ex Wall Street head of the Department of Justice Eric Holder in the US slapping bankers on the wrist for money laundering.

So the NGOs are in bed with multinational corporations and banks everywhere, leaving a trail of sickness, bankruptcy, unemployment and death. They are also in bed with the NATO aligned councils wagging the finger at Vladimir Putin.

My analysis is that the Russian Duma truly has the Viability of Russia's Civil Society at heart, and has the wisdom and courage to deal with these vampires.