Despite the fact that the snow has not melted everywhere in Russia and the ground is still wet, thick, black smoke from the fires can already be seen over Russia. This means the start of spring burning of dry grass - a disease with which forest and fire departments have been struggling unsuccessfully for years. Why do these fires occur and how can we deal with this phenomenon?

Unlike forest fires, some of which may be due to natural causes (e.g., lightning), grass burns are manmade nearly 90 percent of the time. Some fail to put out the fire, some are bored, and others decide to take revenge on a forester. All this causes fires on vast areas so that fire brigades can hardly stop uncontrolled fire walls. 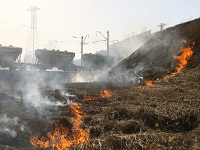 Interestingly, many arsonists try to justify their actions with a certain ideology. For example, some argue that fires are good because they kill harmful insects, such as fleas and ticks. We can only regret that such "science-savvy" citizens were asleep during their biology classes in school or skipped them altogether, otherwise they would have remembered that until the soil warms up in May, these pests are sitting deep underground, and, therefore, cannot be harmed by fire. It is also completely pointless to fight rodents with fire as their holes are rather deep and the animals always have time to hide in secure underground pathways when they smell the smoke.

Others argue that this is a great measure of preventing forest fires. Supposedly they've seen a thousand times that forest rangers do the same. Yes, indeed, foresters do this, but they, unlike these voluntary but unwanted "helpers," know what and where to burn. This is why there are no fires caused by the foresters' burns, while the burns made by the self-proclaimed "forest guards" destroy everything that can burn.

Spring grass burns happened before, but not at today's scale. Why grass burns occur more often these days? Did people become more careless and inattentive or does the grass now grow thicker than before?

Likely, both reasons are true. The grass is indeed thicker, deputy head of the company "Avialesookhrana" Vladimir Grishin believes. In an interview with Pravda.Ru he shared his thoughts:

"As sad as it may be, today a vast amount of agricultural land has no owners. Of course, formally, these lands belong to someone, but in fact they are derelict. They are not used in any way other than perhaps for haymaking. As a result, these lands are overgrown with weeds that are remarkably flammable. It is precisely in those places where burns lead to disasters, because there is no one to monitor arsons and drive arsonists away.

Of course, foresters burn guard bands between these lands and forests, and only because of their work Russia does not turn into a huge bonfire every spring. But their opportunities are limited in many places. For example, if the burns are in the steppe region and lead to a fire, as it happened, for example, last year in the Trans-Baikal region, there is nothing they can do, and the employees of "Avialesookhrana" cannot do anything either as the steppes are outside of our control. "

One of the reasons that contribute to the fact that spring burns are at the level of a national disaster is an abundance of derelict lands. However, people have also changed recently. Volunteer "Greenpeace" firefighter Ivan Burov, who along with his friends worked in Astrakhan Nature Reserve in March of this year, shared his thoughts on the reasons of dry reeds fires in the Volga delta:

"The main reason of fires is arson. Why do people burn grass? It's not just a simple local clinical stupidity, though such cases do exist. Often there is a reason - for example, fishermen may be cleaning up area for fishing. At times people set grass on fire on their agricultural plots and just do not watch where the fire spreads.

Sometimes local people arrange arsons in order to avenge the employees of the reserve for some past offenses. Or they distract their attention because once the reserve employees have to deal with a fire, people can go hunting or fishing with impunity. Incidentally, hunters, like in ancient times, drive the animals out of the woods with fire - that's another reason of arsons. "

Obviously, there are many reasons for grass burns. The result, unfortunately, is almost always the same - forest fires and burnt villages. Grass fires are not harmless little trickles of fire dangerous only to insects. Valery Lobanov, an instructor of a parachute brigade at "Avialesookhrana" said that fires caused by grass burns could be worse than forest fires:

"For some reason people think that when the spring grass is burning, it is not serious. I remember one such grass fire in Buryatia, where the flame height was about ten meters because the grass was shoulders-high and completely dry. I can say that it was burning much more intensely than a forest fire. Those who find themselves in the center of the fire have no chance for salvation. "

If a village or town is in the path of such a fire, it simply ceases to exist, quickly absorbed by a fiery wave. Ivan Burov said that reed fire looks about the same - it is no less dangerous than a steppe one:

"If reeds reach a height of up to two meters, the fire flames soar up to ten meters or more. And if the wind is blowing, this wall of fire is moving very quickly and the fire covers a huge area. In addition, burning dry reed breaks, and its parts fly from one place to another, creating pockets of new fires. It turns out that one area was set on fire and after a short time another ten get burnt."

It is clear that, whatever the reasons for burning dry spring grass, this simply cannot be done because grass fires quickly become a threat to human life. Therefore, unauthorized spring grass burn should be prevented by all means, otherwise Russia will turn into ashes before the onset of heat.

For example, now, "Greenpeace" is collecting signatures in support of the law banning grass burns, and the campaign is close to success. However, one law, even if it is adopted, is not enough because it is physically impossible to put a solid fence of security officers and foresters between the dry grass and the Russians.

This means that educational and outreach activities are needed, and people should be taught about harmful effects of spring burning of dry grass. In Astrakhan "Greenpeace" volunteers have successfully conducted several such campaigns (they are held not only in Astrakhan but all over the country). In addition, each resident of Russia should stop pretending that burning is not their problem, and start to more actively resist all attempts of arsonists. Of course, we all need to be more careful and immediately report grass burns to those whose job it is to extinguish them.
Anton Evseev