In Memory of Komsomolets

Numerous materials were written about the nuclear submarine "Komsomolets" that sank 24 years ago, on April 7th, 1989. The boat that still holds the world record of submergence to 1,032 meters "suddenly" sank one day. 42 people were killed, 27 were rescued. The day of death of submarine "Komsomolets" in Russia is considered the memorial day of perished submariners. 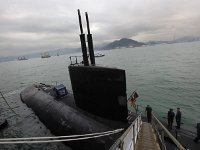 In Severodvinsk, where the ship was built, on the 40th day of her death, a granite stone of Grieve was erected, made of black granite brought by members of the first crew of the ship from its land-based sites in the Murmansk region. On April 7th Russian submariners come to this monument to honor the memory of their fallen colleagues.

The construction of the ship with index K-278 was commenced on April 22nd, 1978, and its launch was held on 3rd of June, 1983. In late December of that year, the unique submarine with a titanium hull was commissioned. The ship had plenty technological innovations.

It was equipped with a quick rescue chamber that could hold the entire crew and was designed to get up from depths of up to 1,500 meters. In the second and third compartments the so-called zone of salvation was formed, sectioned off with transverse bulkheads able to withstand heavy pressure. All seven compartments had fire extinguishers. But all this did not save her from the tragedy.

It was expected that a government commission would make a conclusion on the death of "Komsomolets." But, when the commission's work was completed, only a brief message appeared in the press: "... The cause of the disaster was a fire in the rear compartment of the submarine. Most likely, it was caused by an electrical fire." Many books and articles were written on the death of this submarine, but none of them speaks about the exact reason of the tragedy.

In 1989, no one could have imagined that the most winning of the world's submarines, an honorary member of all books of world records would sink. The super-miracle of the Soviet "defense", a nuclear ship named "Komsomolets," a submarine of the latest third generation, and the only submarine of Project 685 "Fin," is still lying at the bottom of the Norwegian Sea, 180 kilometers South-West of Bear Island, at a depth of 1,600 meters. 42 members of the crew died.

The ship holds the absolute record for diving depth among submarines - 1,027 meters. From July to August of 1983, the submarine was subject to dockside trials. In August, the Navy flag solemnly raised and sea trials began. On December 28th 1983, the receipt report was signed, and "K-278" was put into operation.

Pilots who came to the aid of the ship in distress on April 7th, 1989, saw two life rafts for up to 20 people swimming near the ship. The pilots dropped a container with an inflatable boat, and the submariners started boarding it. The next time the aircraft approached the site, the pilots did not see the ship, and one of the rafts was upside down. The second aircraft dropped containers, but they were of no use by that time. At 5.08 PM the submarine sank. An hour later, the first group of the submariners was taken by a fishing ship "Alex Khlobystov" that rushed to help. The others were fished out of cold water one by one. 27 people were rescued.

The tragedy at the Bear Island provoked strong and very different reactions. Military and newspaper were the first ones to react. The dead were honored, the crew of "Komsomolets" awarded, and Deputy Chief of the Navy Emergency Services lost his job. In addition, an information war between the military and industry started.

According to documents, already at the time of the launch of the ship sailors found serious flaws. For example, at the first dive the rescue chamber was simply "lost" - it was taken away by water pressure. They had to look for the camera at the bottom, lift and modify it. The same happened to similar devices on other boats. This was an unlucky omen. Civil Engineers-shipbuilders who built the boat, more than once claimed that the crew made maintenance mistakes.

In 1989-1998 deep-sea manned submersibles "Mir" conducted seven expeditions in the area of the Norwegian Sea where submarine "Komsomolets" sank. During the expeditions measuring and recording equipment was installed and torpedo tubes containing torpedoes with nuclear warheads were sealed to provide radiation safety.

During the last expedition in 1998, it was discovered that the recording stations were missing, and only carefully undocked anchors were left from them. Likely, the devices were removed or cut by other underwater vehicles or unmanned remote-controlled robots. One can guess that "Komsomolets" was investigated by Western experts, most likely from NATO. The date of the death of "Komsomolets" submarine is proclaimed the Day of Remembrance of Sailors in Russia. Along with the Submariner Day, it prompts us to honor the sailors who fought to the end for their country, and those who participated in the liquidation of consequences of accidents on submarines and lost their lives.