The tradition of lace production in Vologda

The Russian President, Vladimir Putin, went on an inspection tour to Vologda, where he held a meeting on light industry and supplying it with raw materials. He also visited a textile company in Vologda, toured the spinning, weaving and finishing shops, then he looked at the manufactured products. 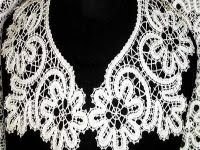 Afterwards, President Putin visited the light industry products exhibition. At the meeting he said, "Today we are meeting in Vologda, one of the traditional centres of Russia's light industry. Overall, light industry output has been constantly growing in recent years. The light industry market is worth about 2.8 trillion rubles, but the share of Russian products is only about 25 percent."

The President expressed his worries about this low number, „Russia's light industry has to develop more dynamically, to upgrade its fixed assets and significantly increase its productivity. It is important to clearly identify the niches where our businesses can take a strong position, and not only in Russia, but also in foreign markets."

Regarding the Russian textile industry, President Putin suggested introducing school uniforms again. This would fulfil several objectives, for example giving the children good clothing at affordable prices and a new boost to the textile industry.

"The State Council meeting at the end of December 2012 raised the issue of going back to school uniforms. Of course, the main objective here is to make sure that all children, regardless of family income, have comfortable and affordable uniforms. It would be excellent, if these solutions could be offered to Russian companies," he said.

The government website of the Vologda Oblast informs that its light industry is comprised of textiles, knitted footwear, clothing, fur and haberdashers, with 6.000 people employed.

Traditionally, the surroundings of Vologda are a flax growing area. Its main light industry is flax fabrics.

"The flax industry is represented by two large manufacturers of flaxen fabrics, besides several smaller ones, in Vologda and Krasavino. The Oblast also has nine flax processing factories, two flax seed growing companies and 39 flax sowing farms," according to the website.

The leading enterprise in Vologda is the Snezhinka Lace firm, which produces high quality lace, famous worldwide. It preserves traditions of lace that have their roots in the past. The bobbin lace is a specialty of Vologda. These laces are handmade and require many hours to be produced. The company employs professional artists and highly qualified workers who possess talent and the knowledge of traditional skills.

There is great demand, in Russia and abroad, for Vologda lace: table cloths and napkins, curtains and embroideries, collars and shawls. They are beautiful masterpieces, mostly made by hand.

Vologda lace, a brand name today, has a proud history, which began in the 18th century. The patterns of floral, ornamental designs, with flowing and smooth lines, are produced mostly in white. They look like a frosty window in winter. Made of flax or cotton threads, Vologda lace is light, yet durable and strong. Vologda flax has a special quality, called "northern silk."

The Museum of Lace in Vologda also hosts international festivals of lace. The collection consists of 500 exhibits, all placed in double-glazed showcases to protect them against light, dust or humidity.

The museum's director, Yulia Yeseeva, spoke of the museum, "The museum occupies a large two-storey mansion, an architectural treasure protected by the State. Situated in the city's historical centre, it attracts swarms of tourists. Requests for excursions keep flowing in."

The city, administrative centre of the Vologda Oblast, was built on the bank of the Vologda River. With a population of 302.000, it serves as Russia's transport hub in the northwest. Classified by the Ministry of Culture as a historical city, it is a main tourist centre as well. In Vologda, 224 buildings have been named cultural heritage monuments.

In 1147, the Trinity Monastery of Vologda was founded. The town is first mentioned in 1264. In the 13th and 14th century, all of its buildings were made of wood. In 1397, during the reign of Vasily I, Vologda became part of the Grand Duchy of Moscow.

Tsar Ivan the Terrible made Vologda one of the main trade centres of Russia. Furthermore, it played a major role for the transit of goods. In 1565, Ivan the Terrible decided to build a fortress, which became known under the name of Vologda Kremlin. From 1568 to 1570, Saint Sofia Cathedral was built in the Kremlin under personal supervision by the Tsar.

The Vologda Kremlin contains masterpieces of Russian architecture, including the Archbishop's Yard, Bell Tower, Saint Sofia Cathedral, Resurrection Cathedral, the Church of the Nativity, House of Bishops and State Museum of History.

Next to the Kremlin, a monument can be seen on the bank of the Vologda River. It shows the Russian poet, Konstantin Nikolaevich Batyushkov, standing next to his riding horse. He went down into history as the famous Alexander Pushkin's teacher.

Under the Romanov dynasty, Vologda became a main military base in Russia. Tsar Peter the Great visited the town ten times for a prolonged stay, in 1692, 1693, 1702, 1722 and 1724. Catherine the Great made Vologda the centre of the Vologda Viceroyalty in 1780, later transformed into the Vologda Governate.

Between 1827 and 1905, a railroad was built, connecting the city with Yaroslavl, Moscow, Arkhangelsk, Saint Petersburg and Vyatka. In the 1930s, during Soviet times, a flax factory, coach repair factory and sawmill were constructed in Vologda. When the Great Patriotic War (1941-1945) began, the city's industry shifted to military production.

In the 1960s, Vologda's industry was extended. The city received an optical and mechanical plant, a large poultry farm and the Polytechnic University. As new residential areas were built, the city expanded considerably. In 2003, a ring road was constructed, to relieve the historical city centre of traffic.

Many houses with fretted palisades, porticos and pillars reflect Russia's authentic architecture. The city is proud of its glorious past and of its importance as a main cultural centre of Russia. Today, Vologda is one of the best preserved cities in the Russian Federation.

Vologda is worth a visit in summer as in winter, when nature resembles the delicate design of Vologda lace.