How hammer and sickle eliminated unemployment in USSR

Unemployment stopped to exist 83 years ago. It happened only in one country and only in official reports, but the story about was still preserved. On March 13, 1930, the last Labor Exchange in the Soviet Union closed (in Moscow). After that, the Soviet Union declared itself the world's first country that finally put an end to unemployment. 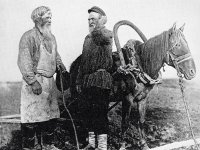 Labor exchanges were first created in Russia in the early 20th century. Their offices appeared in several major cities of the Russian Empire, such as Moscow, Riga, Odessa, and, of course, the capital - St. Petersburg. Apart from them, private offices appeared in the country as well - they were engaged in employment for a fee.

When Bolsheviks came to power, private labor offices were abolished, and unemployment itself was declared the shameful legacy of capitalism. A struggle with the "legacy" began shortly, although NEP, the new economic policy, became an obstacle for it. People of limited means were trying to move from the countryside to major cities. The number of unemployed people was growing as factories were closing in large cities one after another. People started to hold protests, and it became clear that urgent measures had to be taken.

In July 1924, new rules of registration were introduced. Those who had worked for less than 6-7 years, were not allowed to get registered for unemployment, as well as those who had no working qualification. Those who met the requirements, but were already registered, were removed from the register as "low-value personnel." The payment of unemployment allowances was stopped. Formally, it was done not to pamper those who did not want to work, but only wanted to receive allowances. In fact, many people no longer wanted to become registered. Why dealing with extra paperwork and standing in lines if it brings nothing in return (no work, no money )? As a result, the number of registered unemployed individuals dropped considerably.

Mass collectivization started soon afterwards. Methods of collectivization made peasants forget about the possibility to search for a better life. Peasants were securely attached to the land - they were "employed." In cities, the problem was solved by completely abolishing private property relations in the sphere of labor. Free hiring of labor force was prohibited, along with the right to choose specialization. Labor relations became the relations between the citizen and the state. The latter was providing jobs and was in charge to determine who was going to work, where and how.

Altogether, the above-mentioned measures only exacerbated the problem of low efficiency of labor. Yet, they allowed the authorities to declare complete and unconditional victory over unemployment. On March 13, 1930 the last Soviet labor exchange issued the last direction for work to mechanic Michael Shkunov. After that, the exchange was closed. The Pravda newspaper wrote a story about it: "The proletariat of the USSR in alliance with the working peasantry under the leadership of the CPSU, defeating class enemies and their henchmen, in the fierce struggle for socialism, achieved the complete elimination of unemployment in the USSR."

This statement came against the background of the Great Depression in the West. Western stock exchanges were overcrowded, and the Soviet leadership said that capitalism was going to collapse soon.

Of course, unemployment in the USSR could not vanish through declarations and documents. Soviet people, for both objective and subjective reasons, continued to be unemployed. The word "parasitism" was becoming more and more common in the Soviet society. The authorities tried to launch various projects to combat the phenomenon, there were a number of special decrees issued, for example, "On strengthening the struggle against the persons (idlers, parasites), who evade socially useful work and lead an anti-social parasitic way of life." This decree was issued in 1961.

The struggle against parasitism, in many ways, immediately turned into witch-hunt. There can be no clear rules of whom to consider a worker and whom - a parasite. Many of those who were held liable for parasitism during the first three years of the decree, turned out to be sick and unable to work at all. The decree led even to political victims with poet Joseph Brodsky being one of them.

In 1991, the USSR had to acknowledge the existence of unemployment within the scope of the "About Employment."