Russia's Defence Minister, General Sergei Shoigu, has set out to visit Vietnam for talks on military cooperation. He will visit the Cam Ranh naval base in Cam Ranh Bay, a previous maintenance centre for the warships of the Soviet Pacific Fleet. Already in November 2010, the Vietnamese Government had invited Russian experts to update this base, according to Vietnam's Defence Minister, Phung Quang Thanh. 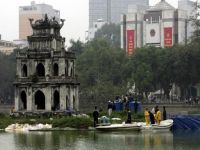 Cam Ranh Bay is located in the Vietnamese province of Khanh Hoa, about 290 kilometres north of Ho-Chi-Minh City, formerly called Saigon. The bay has always been militarily important for Russia. The Imperial Russian Fleet already used it, in 1905, under Admiral Zinovy Petrovich Rozhestvensky (1848-1909) in the Russo-Japanese War of 1904/1905.

From 1979 on, the Soviet Pacific Fleet was present at the naval base of Cam Ranh. It was the largest Soviet naval base outside of the Soviet Union. By 1987, it had been expanded to four times its original size. In May 2002, Russia withdrew from Cam Ranh. In 2013, however, after a lapse of ten years, its use shall be revived. Sergei Shoigu will negotiate details with the government in Hanoi.

Sergei Kuzhugetovich Shoigu, born on the 21st of May 1955 in Chada, Tuva, has served as Russia's Defence Minister since November 2012. In 1977, he graduated from the Krasnoyarsk Polytechnic Institute in Siberia with a degree in Civil Engineering. Sergei Shoigu worked in the construction industry, before being appointed as Minister of Emergency Situations in 1991. He was also the United Russia Party's leader from 2001 to 2005 and Governor of the Moscow Region in 2012.

Russia's relations with Vietnam date back to January 1950, when a Soviet Embassy was established in North Vietnam. The USSR was a loyal and strong ally for Vietnam. After the dissolution of the Soviet Union in 1991, relations remained friendly. Many Vietnamese students study in Russia today with Russian government scholarships.

In January 2001, President Vladimir Putin visited Hanoi to commemorate the 50th anniversary of Russo-Vietnamese ties. He was received by the Vietnamese President, Tran Duc Luong. During Vladimir Putin's presidency, Russian influence in Vietnam has been built up again. In 2009, Vietnam began to buy Russian military equipment, especially Sukhoi Su-30 fighter jets and submarines.

Mutual trade picked up and reached a peak in 2012, as the Vietnam Investment Review reported. According to the Vietnamese Trade Counsellor in Russia, Pham Quang Niem, Russia's exports to Vietnam increased by four percent to 1.400 billion USD in 2012, while Vietnam sold goods worth 2.300 billion USD to Russia, an increase of 32 percent.

Russia exports chemicals, metals, oil and machinery to Vietnam. It buys agrarian products, footwear and textiles from Vietnam. Two oil and gas joint ventures operate in Vietnam, RusVietPetro and GazpromViet. Altogether, Russia has 83 projects in Vietnam, with a total capital of 924 million USD, in the fields of oil and gas, heavy and light industries, fishing and transport.

Vietnam also needs atomic energy for civilian purposes from Russia. On the 7th of January 2013, Bo Ngoai Giao Vietnam, the Vietnamese Ministry of Foreign Affairs, published a report on Russo-Vietnamese energy cooperation, "The National Assembly (NA) of Vietnam pays attention to the energy cooperation between Vietnam and Russia, creating conditions for Russian enterprises to broaden their business in Vietnam."

The Russian State Duma Committee for Energy and the Vietnamese NA Committee for Science, Technology and Environment are expected to "foster their cooperation in specific activities that will enhance mutual understanding and the effectiveness of the two parliaments," according to this report.

Russia's second largest bank VTB will provide one billion USD to the Rosatom Nuclear Energy State Corporation for the construction of a nuclear power plant in Vietnam. The project will cost about 70 billion USD. The contract has been given to the Russian engineering company Atomstroyexport. The Moscow-based bank VTB was founded in 1990. It is registered in Saint Petersburg. The Russian Federation owns 75.5 percent of the VTB shares.

Andrei Kostin, the CEO of VTB, was born on the 21st of September 1956 in Moscow and graduated in 1979 from the Moscow State University with a degree in International Economics. In 2001, he received his PhD in Economics. In November 2011, Andrei Kostin was appointed Chairman of the APEC Summit, which was successfully held in Vladivostok, in September 2012.

The Rosatom Nuclear Energy State Corporation is also headquartered in Moscow. It was established in January 1992 as successor of the Ministry of Nuclear Engineering and Industry of the USSR, and re-organized in March 2000. Rosatom controls the Russian nuclear power holding Atomenergoprom, nuclear weapon companies, nuclear research institutes and nuclear safety agencies.

Head of Rosatom is Sergei Vladilenovich Kiriyenko, born on the 26th of July 1962 in Sukhum, Abkhazia. His grandfather, Yakov Israitel, was a Communist KGB leader and close friend of Vladimir Lenin. Sergei Kiriyenko grew up in Sochi. Later he studied at the shipbuilding faculty of the Water Transport Engineers Institute in Nizhni Novgorod. In November 2005, President Vladimir Putin appointed him Head of Rosatom.

Cultural, touristic and student exchange activities are an additional bonus of Russia's return to Vietnam. Interesting cultural events are organized through the Embassies and Consulates of both countries. Vietnam has an Embassy in Moscow and a Consulate-General in Vladivostok. The Russian Federation is represented in Vietnam by its Embassy in Hanoi and the Consulate-General in Danang.

The Vietnamese Communist leader, Ho Chi Minh (1890-1969), who visited the Soviet Union for the first time in 1923, then again 1927, and whose granite mausoleum in Hanoi is modelled after Lenin's Tomb in Moscow, once said, "Remember, the storm is a good opportunity for the pine and the cypress to show their strength and stability."

Both countries, Russia and Vietnam, have survived quite a few storms in their turbulent history. Thus, both nations had good opportunities to prove their stability and strength, similar to the cypress and the pine.