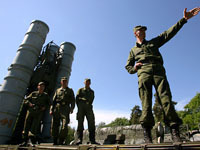 I was once asked in a television interview: "Which anti-aircraft missile system is better: Russia's S-300 or the U.S. Patriot?" A concise answer was needed, and I said that the S-300 was better. Was I right?

If you look at the performance characteristics of the systems, then the answer was correct. In conflicts such as Iran - Iraq, India - Pakistan, where forces were relevantly equal, the answer was correct as well. However, when it comes to a possible attack of the U.S. or Israel against the "third world" countries, such as Iran, Syria and others, Russia's S-300 will certainly fail. Why?

It will happen for the reason that we already had during the Great Patriotic War. In June 22, 1941, our tanks KV and T-34 were much better than the German vehicles, but the losses among our tanks in autumn and summer campaigns in 1941 were larger than those of Nazi Germany. German tanks were acting in close coordination with infantry, artillery, air force and were supplemented with excellent radio stations.

Two Iraqi wars, the war in Yugoslavia and other conflicts showed that the Americans were striving for absolute predominance in aviation and electronic means of warfare. They have dozens of AWACS and 30-40 spacecraft of all types. Do I have to explain that a division or two of S-300 (S-400) can not act alone against such an armada?

If so, should the countries of the "third world" surrender to the mercy of Uncle Sam? It is about time Russian generals should study the history of USA's postwar campaigns. Here is the list: Korea, Vietnam, the first Iraq war, the Yugoslav war. The Americans won in the last two cases, albeit partially. The Yankees and the "enlightened explorers" deployed a huge amphibious fleet in the Persian Gulf in 1991 and planned to land two U.S. marine divisions and an English brigade on the coast of Iraq. Alas, all those good fellows spent the Iraqi campaign in the holds of landing vessels. The reason was simple: Iraqi, or rather, old Soviet mines.

During the Korean War in 1951, the American armada of ships could not land its commandos for two weeks. Again, it was because of old Soviet and tsarist (!) mines.

In 1991, NATO aircraft bombed Belgrade and other Yugoslav cities, as well as power plants, hospitals, television stations, and even the Chinese Embassy. The Yugoslavs capitulated and agreed to withdraw troops from Kosovo under NATO's control. And then came the hour of shame for the USAF and NATO. The Yugoslavs withdrew about 90% of their military equipment unharmed: tanks, armored vehicles, multiple rocket launchers, air defense missile systems, etc. Western journalists had only one question - where did NATO bombs fall?

Nowadays, thanks to the technological development, including the development of hand-held computers, the possibilities of sea mines have become literally limitless. There are self-propelled mines. To transport them, one can use old torpedoes: a 533-mm torpedo can deliver a mine to a distance of 30-35 km from the place of release. A 650-mm torpedo can cover the distance of 50-60 km or more.

Finally, there self-burying mines that can bury themselves in the sand or mud, leaving a thin invisible antenna sticking out.

All of these mines, except for self-burying ones, used to be produced in the USSR. However, during the last 22 years, we have seen no news about the production of new mines.

Everyone has heard of Soviet missile systems BM-13, Katyusha. All our generals and historians celebrate their advantage over German 15- and 21-cm missile launchers. Indeed, the effectiveness of the massive use of BM-13 complexes was unquestionable.

However, North Korea was not happy with Katyushas in 1951-1953. They preferred six-barrel 15-cm mortars, known as Vanyusha. The latter could be rolled back into the cave or trench after an attack. What did they have to do with such big complexes as Katyusha? Vanyusha's accuracy was much higher too.

Let's take the MLRS Smerch that has a range of 70 km. This is great! But its combat vehicle, loaded with missiles, weighs 43.7 tons. A missile is 7.6 meters long and it weighs 800 kilos. Everything can be tolerated if one has advantage in the air. And if not? Why not cutting, or rather, disassembling a Smerch into four parts? One would not need a huge vehicle, such as MAZ-543M, to transport the system. Off-road vehicles or even camels would be enough.

The same can be done to air defense complexes. Ask any American general, what dominance in the air means. It is unlikely that he will be satisfied with a possibility of stealth bombers or supersonic F-16 flying freely over battlefield. The Yankees prefer widebody aircraft, such as AWACS, or AC-130 military transport vehicles, etc.

Why not making a separable version of the Tor missile to be able to combat them? A missile like that weighs 165 kilos. If disassembled into two parts, it could be transported quickly to any location to be assembled there again.

Why not creating new anti-aircraft missile systems that would be more powerful than Igla-1? Its outdated infrared guidance system may not work all the time. It can not hit aircraft flying from the direction of the sun, for example.

More importantly, one should increase the range of MANPADS at least twice. They need to be able to strike aircraft not only during take-off, but also under cruise condition. To achieve this, one may replace the solid-propellant engine with a more powerful solid fuel ramjet engine. This can be done for 3M9 Tor missiles or Era MANPADS that were developed in the 1970s. If it makes them heavier, it could be possible to disassemble them into two modules, weighing 30 kilos each.

Demountable Tor systems and heavy MANPADS will deprive enemy of air superiority even under the condition of superiority in attack aircraft, electronic warfare equipment and dozens of satellites.