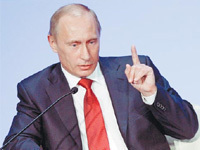 Last Saturday the US media went wild saying things about Russia like,

"Sending a Message': Russian Bear Bombers Caught Circling Guam Before Obama Delivered the State of the Union" - The Blaze

It happened right before Obama delivered his State of the Union address they said.  The funny thing was that it happened last Tuesday but was not reported until Saturday. Yes, the Blaze is right. There was a message. NBC and others would have been on time with the news if they had listened closer to Putin rather than kissing Obama's behind and following Soros' orders. Last Thursday, Putin sent Obama a Valentine:

"Any kind of direct or implicit interference with Russia's home affairs, all sorts of pressure being exerted on our country and our allies - is absolutely unacceptable."

No, he never mentioned the US but implied it as he has done in other speeches like "bomb and missile democracy" and we all know who is spreading that across the world lately.

With McFaul paying off protesters in Moscow and spreading hate; as well as Soros backing Obama and Sharp while pushing Clinton to extremes; the US looks more like terrorists than the terrorists they started fighting. The meeting in Moscow was about counter-terrorism. Can anyone blame Putin for defending Russia?

While he was Prime Minister, Vladimir Putin watched Soros and crew like a hawk and reminded Medvedev to beware of Georgia. It was the US who backed Georgia and lied to the American people stating that Russia started the war. Even Pat Buchanan, former US presidential candidate who left the Republican Party, admitted the US was up to no good and was blaming Russia.

President  Vladimir Putin like a good Cossack under the Tsar, defends Russia with his life.  The Whites who lost to the Reds are proud in Heaven knowing that Putin now protects the land they fought to defend against the Communists. Their death was not in vain. The Tsar and his family that was murdered by the Reds can see also their country rescued and now guarded by men truly loyal to Russia. The answer to a martyr's prayer.