Booster rocket Zenit-3SL, with communication satellite Intelsat-27 on board, blasted off on Friday at 10:56, Moscow time, under the program "Sea Launch" from a floating launch platform Odyssey of the equatorial part of the Pacific Ocean. The launch ended with a failure: the rocket fell into the Pacific Ocean, a source in the space industry told Interfax. 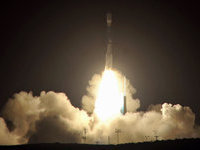 "The emergency situation took place during the 50th second of the flight," an official representing Russia's Space Corporation Energia said.

The first stage of the rocket uses RD-171 engine produced by NPO Energomash. The company will hold a brief analysis of telemetry data of the emergency launch, CEO Vladimir Solntsev said. "We do not have the telemetry data yet. As soon as it appears, we will conduct an express analysis of the situation that occurred," the official said.

Meanwhile, there is a commission being established in the Mission Control to investigate the causes of the failed launch. The commission will include representatives of RSC Energia, NPO Energomash, Yuzhnoye Design Bureau, Yuzhmash and foreign partners of the project.

Booster rocket Zenit-3SL was created on the basis of two-stage rocket Zenit-2 developed by SDO Yuzhnoye (Southern (Ukraine)). The upper stage DM-SL was designed and manufactured by RSC Energia.

The launches of Zenit-3SL are conducted by international consortium Sea Launch, which was created in 1995. In 2012, there were three launches conducted under the program. In total, Sea Launch conducted 34 launches of  Zenit-3SL rockets from a mobile platform in the Pacific Ocean.

The Friday launched was supposed to become the first launch of the program in 2013. The launch vehicle should have launched Intelsat-27communication satellite into orbit. The satellite was built by American company Boeing Satellite Systems based on the Boeing 702MP platform. The launch was arranged for Intelsat international consortium.

The launch mass of the satellite - 6,215 kg; the expected life on orbit - 15 years; the orbital position in the geostationary orbit - 55.5 degrees west longitude. The satellite was to provide communication to both civilian and military users in North and South Americas, as well as over the Atlantic and Europe.