The head of Kazkosmos, (Space Agency of Kazakhstan), Talgat Musabayev, told reporters that the leadership of the republic was considering an opportunity to transfer Baikonur spaceport under the jurisdiction of the Republic of Kazakhstan. According to him, Kazakhstan is also in talks with Russia about  step-by-step changes of the terms of the lease agreement for Baikonur space complex. Musabayev is a high-ranking official, but he is not the head of state. Does he put the cart before the horse? 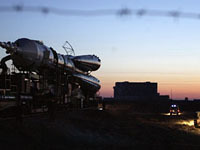 Talgat Musabayev made the above-mentioned announcement when answering questions from the deputies of the Majilis (the Kazakh parliament). But, apparently, Musabayev only took the role of a herald to voice with the highest approval the issue of Baikonur before the Kazakh parliament, and in fact, before the whole world. It appears, though, that the official was sounding out opportunities.

We should say here that 61-year-old Talgat Musabayev used to be a Russian cosmonaut who made three flights into space aboard Soyuz spaceships. He became the chairman of the National Space Agency of the Republic of Kazakhstan in 2007. He is the 79th cosmonaut of the USSR/Russia and the 309th astronaut in the world. The total duration of his stay in space - 341 days 9 hours 48 minutes 41 seconds. His stay in politics is not long enough for him to understand that taking a role of a herald is not very timely, to put it mildly.

However, Musabayev said out loud that President of Kazakhstan Nursultan Nazarbayev set the goal to start the "return" of Baikonur under the full jurisdiction of the republic, allegedly after the meeting with Russian President Vladimir Putin. According to the head of Kazkosmos, the heads of states tentatively agreed to consider the issue of the development of a new comprehensive agreement on Baikonur, which among other things may imply a step away from the lease agreement.

Meanwhile, no dates have been specified about when the process could start.

Incidentally, Russian newspapers wrote with reference to a source close to the Russian-Kazakh intergovernmental commission that the discussion on the joint operation of Baikonur spaceport were being conducted between Russia and Kazakhstan. However, the sides do not negotiate the withdrawal of the spaceport.

According to the Kommersant, Moscow's position on the matter is as follows: there should not be any surprises or ultimatums. Musabayev only wanted to show his importance to deputies and prove that he had nothing to do with the existing problems at Kazkosmos.

A number of Russian publications said that the end of the Baikonur lease was supposedly very profitable for the U.S. If Russia leaves, the U.S. will take its place in Kazakhstan. However, this is a view of only one expert. All others believe that the United States will not take Russia's place at Baikonur should the lease agreement be stopped.

The fact that America simply does not need this fairly old launch site - the country has its own spaceports. American boosters are generally not designed to be launched from relatively high latitude on which Baikonur sits. The Americans would also have to design a new launch vehicle, or upgrade the existing ones to launch them along the trajectory that can provide a launch from Baikonur.

If the U.S. is not involved, then why would Kazakhstan want to establish its jurisdiction over the former spaceport of the Soviet Union? Russia pays $115 million a year for the lease of Baikonur and invests over 100 million to maintain its facilities. The rental period from 1994 to 2010 has brought more than $1.9 billion of Russia's money to the budget of Kazakhstan.

Russia and Kazakhstan have been using the Baikonur spaceport since 1999, and in January 2004, the Russian lease of Baikonur was extended until 2050.

Here is a comment on the situation that Pravda.Ru received from former leading specialist of the technical training center of Plesetsk cosmodrome, Associate Professor Nikolai Korzhev:

"Let me remind you at first that in October 2010, an official representative of a subsidiary of Kazkosmos said that Kazakhstan considered it possible to start to operate Baikonur single-handedly in 2014. So the question is not quite new.

"I would not comment any subtle political aspects of the story, but according to the state plan, and it's no secret, Russia considers it prospective to move manned space launches to a new spaceport, which is being built in Russia's Amur region - Vostochny. This may happen in 2018.

"For different reasons, the launches of manned spacecraft from Plesetsk cosmodrome in the north of the country is highly problematic. They have not been made from Plesetsk and can hardly take place in the future. The new cosmodrome, Vostochny, is a completely different story. The trajectory of the launches will be comparable to those at Baikonur, plus there is a convenient location and good infrastructure.

"Thus, there will be spaceships launched from Baikonur during the coming years. By 2030, Russia will be launching 90 percent of its spacecraft from Plesetsk and Vostochny space centers of its own. The share of Baikonur will drop from 75 to only 10 percent! Respectively, Kazakhstan will be losing money. Russian specialists may leave Baikonur too. Kazakhstan does not have enough of its own high space specialists. It takes decades to train them. As a result, the Kazakh space project may go up in smoke.