Secretary of State Hillary Clinton said the United States was trying to prevent Russia and its allies from turning into something resembling the Soviet Union under the guise of economic integration. 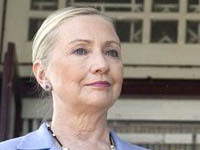 "There is a move to re-Sovietise the region," said the US Secretary of State. "It's not going to be called that. It's going to be called a customs union, it will be called Eurasian Union and all of that. But let's make no mistake about it. We know what the goal is and we are trying to figure out effective ways to slow down or prevent it," Hillary Clinton said in Dublin, as reported by the Financial Times.

It is noteworthy that the Secretary of State made this statement just a few hours before her meeting with Sergei Lavrov. She said it on the same day when the U.S. Senate voted for the so-called "Magnitsky act."

And finally, one more thing - either by accident or not, Clinton made this statement on the eve of the anniversary of the Bialowieza agreement establishing the Commonwealth of Independent States. The agreement was signed by Boris Yeltsin, Stanislav Shushkevich and Leonid Kravchuk on December 8, 1991.

The U.S. Secretary of State also added that in Russia the principles of democracy and human rights were increasingly violated, and the same trend was observed in Belarus, Turkmenistan and other former Soviet countries. Clinton said that sadly, it's been 20 years since the collapse of the USSR, and the progress that was expected was not noticeable.

A spokesman of Vladimir Putin, Dmitry Peskov, commented on Clinton's statements. He said that her conclusions about the attempts to integrate were wrong.

"What we are observing in the former Soviet Union is a new type of integration, based only on economic integration. Any other type of close interaction is not possible in today's world," Peskov said.

Russian President has repeatedly stated that the integration in the Eurasian space did not assume restoration of the USSR. "All we want to achieve is the interaction on political, economic and other issues," Vladimir Putin said in October.

Of course, hardly anyone seriously believes that the restoration of some semblance of the Soviet Union, at least partially, is possible. But the United States, according to the statements of Clinton, generally opposes any attempts of integration of the former Soviet Union. This is the principle of "divide and rule" as is.

Is it cynical? Perhaps. Hillary Clinton is finishing her last few days as Secretary of State. Whether such openness is permissible even for a "lame duck" is a question.

It is evident that Moscow will have a negative reaction to the statement of the U.S. Department of State. Lately there has been too much negativity from Washington.

The Chairman of the Duma Committee on Foreign Affairs Alexei Pushkov noted that "for the first time an official who also holds the position of Secretary of State of the United States opposed the formation of the Customs Union and the Eurasian Union."

"Hillary Clinton's statement shows that for the leadership of the United States, the adoption of "Magnitsky Act" is apparently not enough. "They want to cause more tension in the relationship," said head of the Duma committee for international affairs to Pravda.ru.

"Creation of the Customs Union, as well as creation of the Eurasian Union, is not in the purview of the U.S. State Department and Mrs. Clinton. We are talking about an economic union that does not threaten anyone and is based on the generally accepted principles of integration. Such unions exist in North America, Europe, and Southeast Asia. Isolation of the Eurasian Union as a phenomenon with which the United States would fight can be seen as foreign policy openly hostile to Russia's," he said.

According to Alexei Pushkov, the statement of the American Secretary of State "means, first of all, that there is no resumption of the "reset." "Second, the Obama administration has chosen a confrontational tone for some unknown reason. Third, it is in fact an ultimatum to Russia", said head of the Duma Committee on International Affairs.

He believes that if Washington intends to enter into a political confrontation with Russia in the post-Soviet territory, Hillary Clinton's statement will have consequences. "Russia will evaluate the prospects of cooperation with the U.S. In particular, in those areas that are important to the United States," said Alexey Pushkov.

At the same time, he noted that the U.S. is "not in a position now to declare a geopolitical war on the Russian Federation." "The fact that the Customs Union and the Eurasian Union will not have anything to do with the Soviet Union is clear to everyone but Hillary Clinton,"    concluded head of the State Duma Committee on International Affairs.