Russia seriously considers an opportunity to take up the role of a supplier of organic products within the scope of the World Trade Organization. Russian lawmakers are working on the bill to support the production of organic agricultural products. This law will help Russian farmers enter the EU market with organic products. 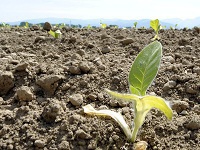 As expected, the bill will be handed over to the Ministry of Agriculture of Russia in December of this year. The law may come into force in 2015.

Organic farmers promised to reduce the cost on their products and use Russia's participation in the WTO to enter the EU market with organic agricultural products. The authors of the new document have provided the following forms of state support: a system of certification of environmentally friendly products, special credits, subsidies, insurance against crop failure and disease and the support of consumer agricultural cooperation. Small and medium-sized businesses that provide services to producers of organic products will also receive assistance from the state.

"As long as organic products are in demand, this idea has a future, of course. Many people buy eco-friendly products deliberately. So I think that the Ministry of Agriculture does it all right, - says Igor Rudensky, the head of the State Duma Committee on Economic Policy. - In addition, we have all prerequisites for the development of the market for organic products: a huge amount of land, handled with a minimum amount of fertilizers. We have greenhouse farms that can grow organic produce. So I think the prospects that we have are more than enough, and as for the support of the Ministry of Agriculture, one can only support that."

Russia's Ministry of Agriculture offers to improve the disadvantaged position of Russian producers of organic cucumbers and tomatoes. The governments of every country of the world support their farmers. Thus, the governments of the eurozone countries push their farmers towards producing organic food, paying them up to 900 euros per hectare, depending on the type of cultivated products. Traditional farming is subsidized by the European Union with 300-400 euros per hectare.

The Russian authorities also encourage their farmers, they only pay disproportionately smaller amounts - only 6-7 thousand per hectare ($200). In this regard, some experts claimed that the state support of agricultural farmers growing organic produce will remain on a low level.

In addition, skeptics say that organic products are indeed highly popular in the developed world, but they are quite expensive. Therefore, even though farmers promised to lower the price level for organic products, they would still remain in the "luxury" category. Growing vegetables without pesticides, synthetic fertilizers, growth regulators, artificial food additives and GMOs in industrial scale is extremely difficult and labor intensive. Therefore, organic products remain in the premium segment of food, and their price is two to three times higher. Only about 5 percent of Russian citizens can afford eating environmentally friendly products. To put it in a nutshell, there is no point in paying much attention to this segment, experts say.

This way or other, the bill will soon become the subject of attention of Russian lawmakers, who, in connection with Russia's entry into the WTO, will have to find ways to help domestic farmers.