Today, NATO does not believe that Russia presents a threat to the alliance, said NATO Secretary General Anders Fogh Rasmussen at a conference on cooperation. He expressed hope that Russia would adhere to the same policy and present no danger for NATO. Is this the case, and what would Russia be able to oppose to the West in the event of a military conflict?

Over the last few decades NATO had been considering Russia as one of the major countries in the hostile camp, but the recent press conference on cooperation of NATO and Finland in Helsinki showed some changes in the views of the international community. At the meeting of Secretary General Anders Fogh Rasmussen said that NATO currently not only did not regard Russia as a potential enemy, but did not present a threat to Russia itself. 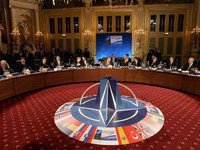 Fogh Rasmussen said that 15 years ago, a bill was adopted whereby Russia and NATO would not use military force against each other. He noted that the alliance adhered to this decision and hoped that the Russian government also followed this policy. At the meeting in Lisbon two years ago at the Russia-NATO Council it was agreed that both parties would do everything to facilitate the development of a sustainable partnership.

Despite the fact that Russia was one of the main opponents of the NATO countries, the history of their collaboration began in 1991, when the country joined the North Atlantic Cooperation Council. In 1994, the Russian Federation took part in the project "Partnership for Peace", and in 1997 in France the founding act on Russia-NATO Council was signed, covering issues of mutual relations, security and cooperation between the two parties. In 1998 a diplomatic Russian Mission to NATO was established.

The relations continued to develop, resulting in the creation of the NATO-Russia Council in 2002. Russia is not a member of NATO, and is not going to join its ranks. However, the Ministry of Defense often conducts joint exercises with NATO, as well as peacekeeping and rescue operations.

How does Russia see NATO? The Soviet Union was an enemy of the capitalist powers, especially the United States. The "Cold War" and the arms race between the two world leaders left no doubt that NATO and the Soviet Union were a threat to each other, and cooperation was out of the question. It has been over 20 years after the collapse of the USSR, but did the relationship between Russia and NATO see a radical change?

Many experts think there has not been much of a change. In 2006, Alexander Solzhenitsyn in his interview said that despite the growing partnership between Russia and NATO, heads of the alliance have been gradually improving their military apparatus, trying to cover the east of Europe and southern Russia. According to him, it is nothing but support for national revolutions, introduction of NATO's interests in Central Asia, etc. This means only one thing - NATO is gradually surrounding Russia in order to seize it in the future.

The events of 2008 in Georgia had a negative impact on the relations between Russia and the alliance. On the initiative of NATO the relations between them have been suspended since August 19, 2008, and on 22 August the Russian side terminated the cooperation agreement. However, Russia's representative to NATO, Dmitry Rogozin, said that this was a temporary measure. Indeed, relations were resumed in March of 2009.

Now, despite the peaceful statements of Anders Fogh Rasmussen, the facts suggest otherwise. For example, in 2008 the General Staff of the Armed Forces of the Russian Federation noted the increase in NATO naval activity in the Black Sea.

Many experts say that the invasion of NATO forces in Afghanistan has dramatically increased the flow of drugs from the country. It is noteworthy that mainly Russia citizens along with citizens of the CIS and the EU suffer from Afghan heroin. According to experts, the active growth of drug use in the Russian Federation is caused by Afghan "potion". According to the director of the Russian Federal Service for Drug Control Viktor Ivanov, currently 90 percent of all opiate drugs come into Russia from Afghanistan. He noted that over the past ten years, drug production in Afghanistan increased so much that it is now double the amount of drug production worldwide. Incidentally, the U.S. has refused to destroy poppy plantations in Afghanistan - what is it but a guarantee of the inviolability of the country's drug trade?

The increasing activity of NATO troops near the Russian border cannot but alarm the Russian government. Large concentration of troops is justified by regular joint exercises. However, experts from the Ministry of Defense note that NATO's leadership has realized that the best diplomacy is power. This became particularly obvious after Russia adamantly protested against the deployment of U.S. missile defense in Europe.

A well-known Russian political scientist Alexander Khramchikhin, studying previous military conflicts with NATO's participation, said that NATO was not able to conduct successful combat operations against Russia. According to his calculations, NATO does not have enough power. The only option, according to the expert, is the use of a preemptive strike by the U.S. against Russian nuclear forces.

The peaceful statements of NATO Secretary General sound too optimistic. It is not certain that NATO is no threat to Russia, and vice versa. Both parties have to take each other into consideration. Interestingly, at this year's NATO summit in Chicago, Anders Fogh Rasmussen spoke negatively about the relations with Moscow. According to Stuttgarter Zeitung, he harshly criticized the words of the head of Russian General Staff Gen. Nikolai Makarov about a possibility of applying force against missile defense systems deployed in Europe. According to him, such actions are contrary to the declared expansion and strengthening of the partnership between NATO and the Russian Federation.

Speaking at the Chicago summit, Rasmussen stressed that all the speculation about a possible attack by NATO on Russia were absolutely groundless. According to him, if Russia was threatening someone, it certainly was not the West. Except that NATO has refused to provide a written assurance that the missiles placed in Europe will not be directed towards the Russian Federation on the grounds that such assurances were given 15 years ago.

Back in 2011, General Makarov talked about the development of an effective anti-missile system that would disable the American missile defense systems without destroying them physically. According to him, it is a unique weapon against NATO if the latter starts showing aggression against Russia.

The statements about absence of threat to Russia from NATO are premature. However, one can definitely say that Russia has means to counter potential Western "enemies."

Author`s name Dmitry Sudakov
*
17:35
Death toll from Turkey deadly quake rises fast to 1,100 and counting
18:54
Ukrainian soldier uses chainsaw and fire to release US howitzer from ice trap
18:30
Onet: Ukraine will lose in six months due to shell shortage
17:36
Russian troops defeat Ukrainian troops in Zaporizhzhia region
14:50
Number of foreign mercenaries in Ukraine continues growing
14:17
Russians buy more than 50 tons of gold in 2022
13:57
Russia will not talk to Ukraine. Russia will talk to the West
13:34
USA's plan to give 20 percent of Ukraine for peace hoax
12:51
Medvedev: Ukraine as a state to be devastated, go bankrupt and be turned into colony
19:57
Russia will use all of its military potential to counter Western arms supplies to Kyiv
Drone with large air bomb on board explodes over Kaluga in western Russia