According to the Russian media Izvestia, Cossacks shall patrol Moscow's main streets soon, to look out for illegal vendors and illegal parkers. The Cossack detachment will be about 600 men strong. Unauthorized trade by all kinds of peddlers shall be curbed, as well as the clogging of pathways by wrongly parked cars.

The Cossacks have already been assisting the Interior Ministry and the Federal Penitentiary Service, also helping rescue workers and first aid units.

President Vladimir Putin said in his pre-election program in February 2012 that the Russian Cossacks shall be re-integrated into the military and police forces. He thinks highly of them and wants to give them the opportunity of using their full potential in the service of the Russian Federation.

According to the Committee for Cossack Affairs, as quoted by Izvestia, the Cossacks doing police service in Moscow will wear armbands and carry identity cards like other squad members, patroling the streets in their traditional uniforms with red stripes.

This might turn out to be an extra touristic bonus, as many foreigners love the Cossack lore with their colorful uniforms, beautiful songs, legends and special customs, a unique memory of old Russia.

Cossack souvenirs, such as cavalry equipment and Cossack clothes - the traditional sheepskin hat, the riding boots - are a big hit among people worldwide. Cossack nostalgia, expressed by such beautiful music as produced by the Kuban Cossack Choir, is very popular as well.

According to Izvestia, the Cossacks will be assisting Moscow police officers, but will not be able to detain suspects or apply sanctions on their own. The Cossack units shall patrol main streets and parks, and watch out for potential trouble-makers around churches, childrens' playgrounds and public gathering places.

The new Cossack units must meet the same physical requirements as the regular police.  They must be physically fit and free of any criminal record. The final approval will be given by the Interior Ministry.

The Moscow Cossack Society has about 9.000 members. On the 17th of October 2012, they gathered at the second International Cossack Village Festival in Moscow. A highlight of this festival was the construction of a chapel devoted to Don Icon of the Mother God. Kirill, the Metropolitan of Stavropol and Nevinnomysk, blessed the chapel.

Cossacks protected the Russian Orthodox Church and the Motherland during difficult times. Today, Cossacks continue doing so, educating children and young people according to their high ethical standards.

Cossacks are strong people, problem solvers, with traditional family values. They go on protecting the Orthodox religion, because it is their foundation, the secure ground they stand on.

A lot of families with their children were gathered at the cheerful Cossack Festival in Moscow, sharing their traditional food, mead and songs with guests, especially the "Lyubo!" - song. It shows that Cossacks have a future.

At the festival, Cossack Colonel, Igor Kulichev, told the press that the Cossack Society of Moscow has special programs for patriotic education of the young generations, providing security and order, training them in civil defense and crime protection. The main tradition of Cossacks is serving the state and society.

They originally stem from democratic, semi-military societies in Southern Russia. Cossacks played an important role as pioneers in the Russian Far East. By the 18th century, Cossack hosts in the Russian Empire served as buffer zones on the borders as border guards, enjoying vast autonomy. Cossack militia protected forts, settlements, trading posts and performed police functions on the frontiers.

Later, they became an integral part of the Russian Army. The Cossack Light Cavalry, agile riders of the steppe, played an important role driving Napoleon's army out of Russia. During the French retreat, Cossack brigades of light cavalry attacked constantly from the back and harrassed their flanks, in order to weaken the retreating French army.

Traditionally, Cossack cavalry men are among the best riders worldwide, performing astounding stunts. It seems that they are like an incarnation of the ancient Greek centaurs, half horse, half man.

Napoleon himself stated with a mixture of admiration and envy, "Cossacks are the best light cavalry troops that exist. If I had them in my army, I would go through all the world with them."

Fortunately, he did not have them in his army, which arrived back home, in France, battered and broken, decimated to a sheer minimum. The Cossacks played no small part in their ultimate defeat.

Cossacks have always served the Motherland well. They keep doing so until this very day. 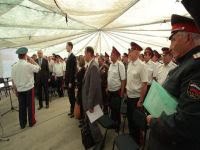