On October 15th, 1970 the residents of Lithuania - father and son Brazinskas -hijacked the An-24 aircraft. They killed a flight attendant and injured three crewmembers. It was the first case of so-called air terrorism in the history of the Soviet Union. The criminals avoided the punishment that they deserved. The father and son found shelter in Turkey and then in the United States. The story did not have a happy ending, though. 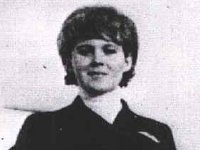 I remember that our pioneer squad at school was named after Nadia Kurchenko. Nadia was the flight attendant, who tried to stop the terrorists when they attempted to get into the cockpit, but was killed with two shots. The Soviet propaganda glorified her deed: a completely defenseless girl confronted two crazed armed terrorists.

In 1970, 19-year-old Nadia Kurchenko was buried in the center of the city of Sukhumi. She was going to get married in three months. Twenty years later (in connection with unrest in Sukhumi) her grave was moved to the city cemetery of Glazov where Nadia finished school. Note that the name of Nadia Kurchenko was given to one of the summits of the Hissar range, to a tanker of the Russian navy and even to an asteroid. It is worthy of note that after the capital repairs of the hijacked aircraft, the An-24 had been flying in Uzbekistan with the photo of Nadia Kurchenko in the cabin for a long time.

On October 15, 1970, the plane was performing a regular flight from Sukhumi to Batumi. There were 46 passengers on board (including 17 women and a 4-year old child) and 5 crewmembers. The flight time was half an hour. They say that wealthier citizens, especially in the category of holidaymakers, would often fly between Sukhumi and Batumi for nothing - just to compare the taste of ice cream in cafes of various southern towns. Most passengers on board were holidaymakers.

Ten minutes after takeoff, two men called flight attendant Kurchenko. The men showed her a gun and ordered to pass a note to the pilots with a requirement to fly to Turkey. Kurchenko tried to warn the crew of the armed men and was killed. The criminals were Pranas and Algirdas Brazinskas. Pranas, 46, had been convicted in Vilnius for theft. His son was only 15 years old. They were armed with pistols and a shotgun. There was a grenade hanging on the man's neck.

In 1955, Pranas Stasio Brazinskas was convicted of power abuse and sentenced to one year of corrective labor. Ten years later, when working as a store manager, he was sentenced to five years for theft of property. After he was released under an amnesty, he settled in the town of Kokanda, Uzbekistan. He got married afterwards and changed his name to Koreyvo. That's the background for the elder murderer and hijacker.

Having killed Nadia Kurchenko, the armed men made 24 shots indiscriminately. Aircraft commander Georgy Chakhrakia and navigator Valery Fadeyev suffered severe injuries. Mechanic Oganess Babayan was shot in the chest. Only the second pilot survived, Suliko Shavidze. The wounded and horrified crew managed to land the plane in the Turkish city of Trabzon. The pilots at first tried to mislead the terrorists and land the An-24 at the military airport in Kobuleti. The hijacker warned, though, that he would explode the aircraft.

Afterwards, the story took a very strange turn from the point of view of international law. Back in 1970, legislative norms for such cases as hijacking aircraft were so "vague" that the Turkish side had every opportunity to make fun of the USSR during the extradition of the criminals. Imagine: just one day (!) before Brazinskas hijacked the An-24, The Hague adopted a draft International Convention for the Suppression of Unlawful Seizure of Aircraft. In other words, the Convention had not come into force yet, and the Turks were free to do what they wanted.

Turkey returned the passengers and the aircraft, but refused to deliver the criminals. Brazinskas Sr. publicly declared himself a member of "the Lithuanian resistance," who faced death penalty in the USSR. He claimed during the trial, that he was forced to come into a gunfight on board the plane with two KGB agents, whom he and his son killed. Well then, how could that "martyr" be returned back to the USSR?

In fact, there were no KGB agents on the plane, and it was the Brazinskas, who made all the 24 shots. The "humane" Turkish court was lenient to the killers. The father was sentenced to eight years in prison, and his son - to only two years as a minor. Four years later, the father was amnestied. Brazinskas moved from Turkey to South America and then to the U.S., where the local Lithuanian diaspora took them under the wing. They changed their names: the son became Albert Victor White, while the father called himself Frank. In 1983, they received U.S. citizenship. They earned money as painters and sold weapons.

The Soviet authorities tried to return the criminals to their homeland, but, alas, to no avail. In 1982, the U.S. State Department announced that the request for political asylum from father and son Brazinskas was rejected and they were deported from the United States. However, the U.S. federal Immigration and Naturalization Service did not respond to the Soviet authorities that wanted to find out where they were deported and when.

In fact, Pranas Brazinskas and his son received documents with new names and settled in the Californian city of Santa Monica. The air terrorists stayed to live in the United States.

The end of the story was just as tragic as the beginning. On February 5, 2002, the son killed his elderly 77-year-old father after another fight. The victim did not evoke sympathies with anyone. The lawyer called him a terrorist during the trial. Their house was full of weapons. It was not because of fear of retaliation by the Soviet secret services - he was afraid of secret Soviet agents until his last day. He used to chase kids with a gun in his hands, threaten to kill neighbors, and on his last day he pointed a gun at his son. The latter hit his father with a dumbbell eight times on the head.

The man was sentenced to 16 years for premeditated murder. The article of U.S. laws, on which Brazinskas Jr. was convicted, does not stipulate amnesty.

It is worth recalling that there was a much bigger case of air terrorism in Soviet history. On March 8, 1988, the Ovechkins family tried to highjack a Tu-154 jetliner, but that's a completely different story.