Quite often in the modern Russian media one can encounter statements that battle tank M1A1 "Abrams" is the best in the world, the "crown of creation", and T-90, is obsolete and not a competitor for the American vehicle. But is this the case? 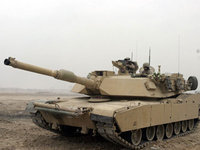 Hypothetically, we can certainly have lengthy discussions and even simulate a battle between T-90 and M1A1 "Abrams". However, in reality these tanks will never meet on the battlefield. 142 million Russian consumers of "Coca-Cola", jeans and American chicken are too valuable for the American manufacturers to introduce such a radical change by means of a military clash.

From that moment when Khrushchev had purchased in the U.S. American grain for many millions of dollars there were no more doubts that the two economies has become closely linked. No policy is worth breaking these ties.

Rhetoric and mutual threats in this case are not worth much. The "Star Wars," "neutron bomb" and all sorts of missile defense system is nothing more than the tools of information warfare, in which the Americans have succeeded. All the talk about the benefits of "Abrams" is from the same area. In terms of their fighting qualities modern tanks are about all the same, because they originated from the same world tank building experience. Purely national differences, of course, play their role, but they are not as significant when compared with the achievements of science and modern military equipment.

It is believed that the tank M1 "Abrams" is not meant as a breakthrough tank, but as an anti-agent, whose task was to stop the masses of Soviet tanks bursting into the English Channel. Therefore, the tank was developed in a close cooperation with the German engineers, but specific to the American tank school. That is why the main armament of the tank, from modification M1A1, was 120 mm gun M-256, modified German gun Rh-120.

The armor of the first tanks "Abrams" is a multilayer composite armor created in the UK. In the later versions the armor with uranium-ceramics of the first and second generations is used.

Also read: Russian tanks beyond competition no matter what they say

The armor of T-90 tower is of "semi-active" type. In front of the tower there are two cavities at an angle of 55 degrees to the longitudinal axis of the tool, where armor packages consisting of 3 layers: plates, spacers and thin plate are located. The effect of its use may reach up to 40 percent compared to the monolithic armor of the same mass.

In addition, the tank is a complex of explosive reactive armor "Kontakt-5", at the same time protecting it from both cumulative weapons (COP), and from the armor-piercing projectiles (BPS). It provides a powerful impetus to the side, allowing to destabilize or even destroy the core of the BPS before it begins to interact with the armor.

It is interesting that the opto-electronic complex designed to protect it from the damage by tank missile with command guidance systems such as semi-automatic "Tow", "Hot", "Milan "," Dragon ", laser homing type "Maverick "," Hellfire "," Copper-head ", as well as artillery systems with laser rangefinders was first commercially installed on the T-90.

Accordingly, the M1A1 tank turret consists of outer and inner steel armor plates, connected by transverse ribs laid between the packages of metallic and non-metallic materials. Due to its high density (density of uranium is 3.19 g/cm3), these plates at extremely small thickness provide an "explosive" nature of destruction of the elements of the cumulative jet.

The critics of the American tank draw attention to the large gap between the hull and turret of the "Abrams" that is so large that one can hit the area under the tower at a distance. To do this, one can aim for the upper front hull located at a very steep angle, so that in case of a ricochet, the projectile will fall under the tower. In this case, neither the efficient armor of the front body parts, nor the modern turret will help. Weak armor in the sides of the engine and crew compartment makes tank vulnerable to the fire of small-caliber artillery.

Accordingly, vulnerable zones in the armor of the T-90 are the sections on either side of the gun, not covered with explosive reactive armor. There is also a weakened zone on the upper front part of the driver's inspection device. This is a design feature of all domestic tanks, starting with T-64, that for some reason, no one bothered to fix.

However, in a war all the technical indicators that look so good on paper and on the computer screen, but still fit into the pretty charts and graphs, are not worth much. Otherwise we will never be able to explain the fact why the Soviet Union that in the past war was armed with the best in the world T-34, and has produced many more tanks than Nazi Germany, had such high losses in tanks. In addition, the Germans were also fought by England and the USA. Today on the battlefield the human factor is increasingly more dominant.

This factor includes total technical literacy, and to what extent young recruits entering service in the Russian Army and the U.S. can be trained. That is, the question is, who will be the better at managing sophisticated armored vehicles: the experienced pros on a good salary, raised in a home with a swimming pool with year-round heating, or a 19-year-old conscript from the Russian "boonies", possibly a victim of bullying. Here, history shows that the less "advanced" nations were usually able to succeed at first, but eventually they were always defeated.

We should not forget about the mentality that directly affects human behavior in combat. The war is a risky job, and good soldiers costs money. Therefore, no matter how expensive the measures taken to improve the survival rate of the tank on the battlefield, soldiers cannot be neglected as they may feel left out, and it will lower their morale. When the confidence of the tank drivers is low, there is a danger of unwillingness to engage in a battle with the enemy.

The Russian tanks are designed to attack, while U.S. tanks, as already noted, are not a means of aggression, but a powerful antitank weapon, along with helicopters "Apache" and attackers "Thunderbolt-2." The presence of the loader allows them to develop a very high rate in the decisive moments of the fight, and the separate storage of ammunition increases the chances of survival.

Meanwhile, the entire world once saw photographs of the Soviet T-72 tanks, blown up by Chechen fighters in Grozny: inverted towers thrown up by internal explosion, or even completely destroyed.

We can be comparing for a long time which tank has thicker armor and perfect electronics, which has already been done by Kenneth Maxey in his book, but this will not solve the problem.

The way out is in the analysis of the overall macroeconomic situation since 1945. It very clearly shows that almost all of the local conflicts with the weapons created in the USSR and in the West, from the military point of view, ended in a draw. This means that neither side had significant superiority.

In the political sphere, we also see that none of the T-72 saved pro-Soviet regimes from the collapse, and the Soviet Union - from the economic transition to capitalism. The outcome of the invasion of Iraq in 1991 was decided not by tank battles between the "Abrams" and the T-72, but a massive strike with precision-guided missiles at the control center and mass bribery of the elite Iraqi army generals.

In terms of the global policy Russia won the greatest war in human history: saved the world from fascism (and Russian tanks have played a significant role), but as a result lost the world. The winner is absent on the political map today, and no tanks saved it from the collapse. Hence it is not about whose tanks are better, but something else.

When Russia figures out what it is, that's when its tanks will be the best in the world. For now, Russian tanks are far below western ones and this is why they are harder to hit.