Gazprom is only a drop in the ocean for Greenpeace

An oil rig of Russia's natural gas giant Gazprom in the Arctic has attracted a lot of attention recently. Activists of international organization Greenpeace acted as newsmakers in the story. They stormed the platform, having caused quite a stir for security services and the Federal Security Bureau. Environmentalists explained their act with a wish to protect the fragile ecosystem, which can be damaged by drilling. 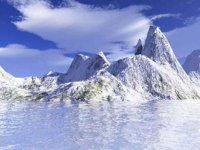 Apparently, the actions of the Russian company on the Arctic shelf seriously affected the environmentalists. Even Greenpeace Executive Director Kumi Naidoo himself took part in the siege of the platform.

A curious story unfolded on Prirazlomnaya platform in the Pechora Sea early morning on Friday. The platform is the world's first-ever multi-purpose complex that provides year-round drilling with the use of vertical and horizontal methods. The complex also extracts oil and prepares it for transportation by tankers.

As the activists noted, the employees of the platform did not show any resistance. Apparently, it took the Russians a while to understand how serious the Greenpeace activists were. The early hour probably played a role too. Hardly had the activists reported their heroic act to the world media, when the platform employees "woke up" and started fighting back.

The fight took the form of shooting water from a fire hose at Kumi Naidoo, the head of the "green delegation." One should bear in mind the fact that the drama was unfolding in the Arctic, where even in summer the weather is not good for splashing around in the water. Fortunately, the leader of Greenpeace was fully prepared for the siege of the platform: he was wearing a diving suit.

It is worthy of note that the main characters of the story were actually mountain climbers rather than common environmentalists dressed in T-shirts with chest slogans. It was an international group: there were people from Africa (Kumi Naidoo), the United States, Canada, Germany and Finland. The activists climbed onto the drilling platform, and started telling the Russian drillers to stop the "disgrace" on the shelf and go home. Otherwise, the activists threatened to stay on the platform as long as their food and water supplies could let them to.

The activists began to organize a camp on the platform and unfold environmental posters. The banners that "decorated" the platform of Gazprom called to stop drilling on the Arctic shelf, which, according to the environmentalists, could lead to a catastrophic oil spill in the area. After watching the unexpected guests taking roots on the platform, the Russian drillers realized that they did not need that neighborhood.

At first, the drillers called the Coast Guard, then the security service of Gazprom Neft Shelf, and even telephoned the FSB. The drillers sent a delegate in the "enemy camp" to negotiate. The negotiations between the two sides were doomed from the start. Obviously, Gazprom was not going to make any concessions. Cairn Energy, a British company, which also had an unpleasant encounter with unexpected guests from Greenpeace during the development of the Arctic shelf near Greenland, did not make any concessions either. The British eventually wrapped up the project to explore deposits of resources in the Arctic, but it was not because of Greenpeace. The reason for which Cairn Energy left the shelf alone was simple - they did not find anything there.

Meanwhile, Greenpeace continued the struggle for the Arctic. "We climbed on the rusty oil rig of Gazprom with the support of a million people who joined the new movement for the protection of the Arctic," the press service Greenpeace quoted Naidoo. The official added that the action of Greenpeace received support from the indigenous peoples of the North, who last week signed a petition against the extraction of oil on their historical territories. Meanwhile, for Gazprom, the work on the shelf means only one thing: the corporation can go down in history as the first Russian company that developed an oil field in the pristine depths of the Arctic. Greenpeace activists are not likely to make Gazprom give up the great idea no matter how many camps they build on Prirazlomnaya oil rig.

Greenpeace, in addition to the main task of saving the Arctic shelf, has more appropriate and reasonable claims to the Russian gas giant. The activists believe that the drillers of Prirazlomnaya do not know how to prevent an ecological disaster that could occur during the drilling. According to Greenpeace, neither Shell nor Gazprom have effective and proven technologies for liquidating oil spills under severe conditions of the Arctic. Should a disaster occur, the tragedy in the Gulf of Mexico will seem a "children's party." The Arctic conditions (low temperatures, strong winds and ice) will inevitably complicate the rescue operation, which will have to be conducted far away from civilization.

For the time being, Gazprom officials only said that the action of Greenpeace does not hamper the works on Prirazlomnaya oil rig. One shall assume that the Greenpeace action is unlikely to be the last. Unfortunately, even such highly publicized operations of environmentalists are not likely to stop the struggle for the Arctic shelf.