Russian submarine sailed incognito along the coast of the U.S.

A Russian nuclear submarine of project 971 ("Jaws", in NATO classification), armed with long-range cruise missiles, sailed for a long time without being detected in the waters along the U.S. coastline, the Gulf of Mexico, informs the Washington Free Beacon, citing an unnamed U.S. official.

The submarie has the capability of sinking U.S. nuclear submarines or aircraft carriers.  "The Akula was built for one reason and one reason only: To kill U.S. Navy ballistic missile submarines and their crews," said a second U.S. official.

The submarine is distinctive for its large tail fin.  They are equipped with the SSN-21 and SSN-27 submarine-launched cruise missiles, as well as SSN-15 anti-submarine-warfare missiles. The SSN-21 has a range of up to 1,860 miles. The submarines also can lay mines.

According to this information, the presence of the Russian submarine off the American coast of was confirmed only after the ship had left the region. "It's a silent submarine, able to approach undetected," the official said.  The Akula-class attack submarine is one of Russia's quietest submarines.

The U.S. Navy operates a strategic nuclear submarine base at Kings Bay, Georgia. The base is home port to eight missile equipped submarines.

Representatives of the U.S. Navy refused to comment on the report.  The vast majority o fthe U.S. media is also keeping the incident under wraps.

The incident was the second known time Russian submarines have made their way into U.S. territorial waters in 2009.

In a letter to Chief of Naval Operations Admiral Jonathan Greenert on Friday, Senator John Cornyn (Republican, Texas) demanded "a detailed explanation of the facts" surrounding the incident.

Russian Deputy Premier, Dmitri Rogozin, announced months ago that Russia was working on a plan to build 10 new attack submarines and 10 new missile submarines through 2030, along with new aircraft carriers.  Russia delivered one of its Akula-2 submarines to India in 2009.

Republican presidential candidates have targeted Medicare, Medicaid and other federal entitlement programs for future budget cuts. But, one candidate set his sites on the United States' defense budget, which he said should be on the table, as well.

"If you look at defense ... we're spending more than the rest of the world combined," former Utah Governor Jon Huntsman said in a debate with former House Speaker Newt Gingrich.

The military industrial complex has to be getting nervous with the talk of cuts in military spending.  The Obama administration's has put forth a plan to reduce defense spending by $487 billion over the next 10 years.  So they hope the scare tactics will serve them.


Translated from the Portuguese version and appended by: 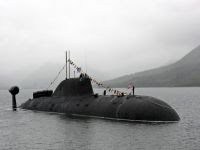