Russia: Brahimi cannot fulfill his mission without a ceasefire

The Foreign Minister of Russia, Sergei Lavrov, stated on Saturday that the new special representative of the United Nations (UN) and the Arab League for Syria, Lakhdar Brahimi, will not accomplish his mission without establishing a ceasefire in the Arab country.

"Political dialogue will not work, or at least its efforts will not give a definitive result if the violence does not stop. And this does not depend on Brahimi, just as it was not depending on observers who only continued as the declared truce was agreed upon last April," Lavrov said in a television interview broadcast from Moscow.

Lakhdar Brahimi's appointment comes after the UN Special envoy and the Arab League, Kofi Annan, announced on August 2nd that he would not renew hts role as mediator in the conflict, through which the Syrian people have lived since mid-March last year, due to the lack of cooperation by the world powers to restore peace in Syria.

Annan was appointed last February 23rd as the first joint representative of both agencies to Syria, a position through which he tried to implement a six-point plan which provided for a ceasefire between armed groups and government security forces, an initiative that was launched from mid April.

However, the plan was accepted and observed only by the Syrian government, unable to reach their goals, because terrorist armed groups have manifestly violated it repeatedly with the encouragement and support of the west.

Meanwhile, Hillary Clinton was discussing with Turkey the possibility of a no-fly zone in order to protect anti-government terrorists. 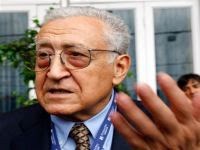