August is a black month for the Russian Navy. On August 12, 2000 the nuclear submarine "Kursk" sank, on August 30, 2003 submarine "K-159" sank in the Barents Sea, on August 7 of 2005 bathyscaphe "AC-28" almost sank off the coast of Kamchatka. The loss of "Kursk" 12 years ago still causes heated discussions: how could this happen? 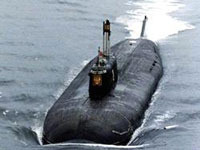 At the time, "Pravda.Ru" was one of the first (if not the first) of the Russian media outlets that published the most horrible theory of death of the missile submarine a year after the tragedy. A group of Russian 'conceptual' scientists thought that the submarine was killed by a collision with a foreign military submarine, presumably American. They say the report turned up on the desks of the top officials of the country. However, there has been no response to it so far. To this day, that theory is not completely rebutted.

K-141 "Kursk" was the Russian nuclear missile-carrying cruiser of Project 949A "Antaeus." It was built at the Severodvinsk shipyard "Sevmash" in 1992, and commissioned on December 30, 1994. From 1995 to 2000, "Kursk" served in the Russian Northern Fleet and was based in Vidyaevo. It sank in the Barents Sea, 175 kilometers from Severomorsk at a depth of 108 meters in a crash that occurred on August 12, 2000. All 118 crew members on board were killed. In terms of the number of deaths it was the second largest accident in the postwar history of the Russian submarine fleet after the explosion of ammunition on the submarine B-37.

Immediately after the accident a few admirals and officials claimed that "Kursk" was torpedoed by an American submarine. Later, this theory was silenced in favor of the official one. The admirals were ordered to keep silent.

However, director Jean-Michel Carré in his film "The Kursk: A Submarine in troubled waters" that aired on January 7, 2005 on French television, argues that "Kursk" was torpedoed by a U.S. submarine "Memphis." According to his theory, "Kursk" was performing a test shot of the new torpedo "Squall", and the tests were observed by two American submarines - "Memphis" and "Toledo."

There's nothing unusual there - normally both Russian and NATO submariners watch each other during tests and in the ordinary course of combat training. This is understandable as it is the best way to teach divers combat skills. However, it is done at a safe distance.

"Toledo" came dangerously close under the guise of "Memphis" that was "in the shadow." At some point "Kursk" and "Toledo" clashed (a video of "Kursk" sitting at the bottom of the sea shows long gaps in its case) and to prevent "Kursk" from shooting at "Toledo," "Memphis" has opened fire at "Kursk". Some of Russia's top retired military officials still think this theory to be true.
Apparently, even if we learn the truth, it will not be any time soon. One way or another, "Kursk" was the most "uncomfortable" of the Russian submarines for the American fleet. A year before the accident the Russian submarine bomber scared the entire NATO.

In August - October of 1999 the ship that NATO called "the killer of aircraft carriers", participated in the march into the Atlantic Ocean and the Mediterranean Sea after performing an "excellent" missile firing at the order of the Russian Navy commander.
The ship secretly broke into the Mediterranean via Gibraltar. The "Kursk" conducted covert surveillance of the group of the Sixth Fleet of the U.S. Navy in the Mediterranean that included the aircraft carrier "Theodore Roosevelt," used against Serbia during the NATO operation against Yugoslavia. During the campaign in the Mediterranean, "Kursk" performed five conventional attacks at the real targets. As a result of the campaign, 72 crew members were presented with the government awards. In fact, "Kursk" was covering Yugoslavia.

The sudden appearance in the Mediterranean of the newest "killer of aircraft carriers" caused panic in the U.S. Navy. All anti-submarine forces of the Mediterranean countries of NATO were involved in the search of "Kursk."

However, the K-141 disappeared as suddenly as it emerged, inflicting a crushing blow to the American pride.

Several top ranking officials, including the commander of the Gibraltar defense zone, lost their jobs, and "Kursk" and its commander were elevated to the rank of "personal enemies of America." The commander of the nuclear submarine, captain of the first rank Gennady Lyachin, was awarded the title of the hero of Russia. He never received his well-deserved reward because of red-tape.

In 1999 captain of the crew, commander Lyachin, was preparing for the new long march as part of a powerful group. after the collapse of the Soviet Union, Russia was preparing the return to the Mediterranean Sea.
On July 30, 2000, the crew of "Kursk" took part in the military-marine parade dedicated to the Day of ​​the Fleet in Severomorsk. On October 15, 2000 the submarine was to access the Mediterranean Sea from Severomorsk, but sank on August 12.