The legalization of short-barreled guns in Russia will not change the situation "a criminal is with a gun, but I'm not," no matter what the proponents may claim. To make the weapon truly civil, most citizens should have the motivation and the ability to buy it. How much a pistol would cost in a store? Can you imagine? Will potential threats outweigh that amount? 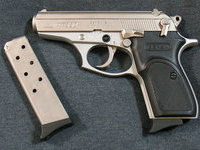 In Russia, civil defense weapons wers legalized in 1993. Since then, the number of guns in the hands of the population has been growing, which the Interior Ministry continues to repeat over the over again. According to various sources, people own from 1.5 to 3 million units of self-defense weapons; 60 percent of this amount is traumatic guns.

This is not a lot actually. The words about the need in self-defense so that people could defend themselves against armed criminals do not correspond much to the actual degree of arming people. In the end, it is better to have a gun in the hand than to be completely unarmed in a critical situation.

For comparison, U.S. citizens hold 66 million handguns (it goes about legal and lethal weapons). Forty-five percent of American households possess weapons. Pump action shotguns come second in popularity in America, which means that we are talking about weapons of self-defense, rather than, let's say, hunting weapons.

Apparently, the state of affairs with armed criminality in the United States is completely hopeless. A half of the population defends themselves, the other half attacks.

In Russia, only 1-2 percent of the population have acquired gas and traumatic guns in 20 years. I would assume that this is the real "capacity" of the legal market of self-defense weapons in the country, no matter traumatic or lethal.

Some would say that it is not about the scale and capacity - it is about the right of citizens to possess weapons. This is what supposedly makes a citizen a full-fledged citizen.

Well, let's talk about rights. From this point of view, I am no different that Abramovich, because we both have the same rights under the Constitution and international standards. Our opportunities are different, though. Human rights advocates do not pay attention to such trifles, although they should. Having the right to purchase a lethal gun is not enough - one should have an opportunity for that.

Will criminals be more cautious if a potential victim is potentially armed? Here is another interesting question. Is the criminal level lower in the countries where people can freely buy guns?

In today's Russia, traumatic gun "Wasp" ("Osa") costs about 10,000 rubles ($300). A Makarov gun is 14,000 ($440). Western models of traumatic guns are in the price category from 18-20 thousand rubles and higher. This is actually one of the reasons why "the arming of the people" does not work well. It's expensive against the background of no explicit constant threats.

How much will a fire gun cost in a Russian store? Will it be two or three times more expensive? How many Russians will be willing to pay a thousand dollars or more for an expensive toy?

No worries for Moscow about that. The number of people with expensive iPhones and iPads in the subway speaks for itself, taking into consideration the fact that the average salary in the city is 30,000 rubles ($900). However, it is unlikely that the system of consumer crediting would embrace firearms just as easily as it embraced trendy gadgets ...

Russia is not limited to the Moscow Ring Road. In neighboring regions, people still get paid 5-10 thousand rubles a month ($200-300). For them, purchasing a fire gun is a question of three or even six salaries. They would have to save for a couple of years at least.

Only well-to-do people in Russia can afford buying fire guns. Civil weapons in Russia simply can not be. It would only be "weapons for the rich." It would also be weapons for fans and for criminals, who do not suffer from the lack of funds usually. Common people will remain unarmed, not matter whether the government legalizes short-barreled guns or not.