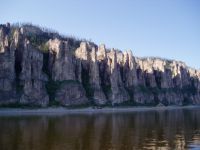 The Lena Pillars Nature Park is one of twenty-six new sites in the UNESCO World Heritage List for 2012. The spectacular rock pillars in this park stretch 100 metres high along the banks of the Lena River in the Republic of Sakha, Yakutia. It is the tenth Russian natural site on the list.

Taking part in the nomination of the Lena Park Nature Reserve were the following entities: Institute of Biological Problems of Cryolitozone of the Siberian Branch of the Russian Academy of Sciences (SB RSA), Yakutsk State University, Institute of Diamonds and Noble Metal Geology of the SB RSA, The Lena Pillars Nature Park, Geography Institute of the RSA, the Likhachev Cultural and Natural Heritage Institute, NABU and the Natural Heritage Protection Fund. (1)

At Lena Pillars Park, there are numerous fossils from the lower Cambrian period, fossils of mammoths, bison, woolly rhinoceros, Lena horse and reindeer. There are frozen ground karsts (a geological formation shaped by the dissolution of a layer or layers of soluble bedrock), silt pinnacles, bulgunnyakhs (also called pingo, an ice formation), and tukulans, which are fluttering sands, a unique landscape peculiar to a northern desert.

It is home to 464 species, 276 genera and 81 families of plants and is the only place in the world where one can find the Redowskia sophiifolia.

The park is home to 42 species of mammals and 99 species of birds which include Bewick's swan, peregrine falcon, gyrfalcon, white-tailed eagle, golden eagle, osprey and sterkh.

In the same session, UNESCO also listed the following sites (2)

Rio de Janeiro, Carioca Landscapes between the Mountain and the Sea (Brazil);

The Landscape of Grand-Pré (Canada);

Cultural Landscape of Bali Province: the Subak System as a Manifestation of the Tri Hita Karana Philosophy (Indonesia);

Birthplace of Jesus: Church of the Nativity and the Pilgrimage Route, Bethlehem (Palestine);

Garrison Border Town of Elvas and its Fortifications (Portugal);