Last week, Russia began inspection flights over the territory of Canada under the program "Open Skies". In Canada, there are opinions that they will be used to monitor the military and other objects in the Arctic. The fear is fueled by the recent arrest on suspicion of spying for Russia of an officer of the Canadian Naval Intelligence. These objective fears, however, do not stifle the calls to unite to resist attempts of the U.S. and China to push the "international status" of the region.

The inspection flights will last three days. It is interesting that under the contract "Open Skies" signed by 34 countries, the Russian planes were flying over the territory of Canada much less than Canadian - over Russia. The last time the Tu-154 inspected military facilities and other objects of its Arctic neighbor in 2004. The Canadians at the same time inspected four times a year, and another observation flight was last week. 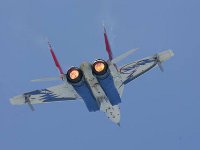 Of course, the information taken by the sensors cannot be made public, but the fact that the Russian military suddenly "woke up" suggests that Canada got some new facilities for the inspection. This is probably the objects of exploitation and military activity on the Arctic shelf and around it. Especially now, when Canada has a disputed territory with Russia. We are talking about the underwater Lomonosov Ridge, extending from the New Siberian Islands of Russia through the center of the Arctic Ocean to Canada's Ellesmere Island. Canada challenges the request of the UN Commission filed last year on the identity of the ridge of Russia on the grounds that it is an extension of its territorial shelf.

In addition, it is the first inspection after the arrest of the Canadian officer of Naval Intelligence Jeffrey Dilayla in January on charges of spying for Russia. "Of course, there is an agreement, but we must be very careful not to forget the past espionage cases. We must not forget that the relationship between Russia and Canada were not always friendly, even 20 years ago, so who knows what will happen in the next 20 years", said political science professor of the Royal Military College of Canada Huchan Hassan-Yari, who was quoted by Canadian newspaper National Post.

The inspection is carried out by a specially-equipped Tu-154M LC-1. Currently preparation for certification testing of a completely new aircraft is being conducted - Tu-214ON, that last year built an aircraft factory in Kazan, and was shown at the last Moscow airshow.

Amid these concerns that are not groundless, there are voices of those who believe that Canada should be looking at Russia as a strategic ally in the Arctic region, especially in opposition to the U.S. The well-known author of "Who's the owner of the Arctic?", professor at the University of British Columbia Michael Byers published his article "Canada will help Russia's Northern Sea Route" on June 9 in The Moscow Times. He wrote that the coast of the Arctic Ocean belongs mainly to Russia and Canada, and the attempts by others to change the status of the "inland waters" to the status of "international straits" should be strongly discouraged.

He wrote that it was time for the development of a joint Russian-Canadian position on the legal status of the Northern Sea Route and Northwest Passage - before it's too late. The author believes that the main opponent is the United States. Indeed, the control over the North Sea brings Russia great profit, as any foreign vessel shall employ Russian support. With the retreat of Arctic sea ice this way may in the future become a major maritime trade route between Europe and Asia, as well as Europe and the West coast of America. The Russian president spoke about this. This is well understood by the Chinese, who have no relation to the Arctic, but purposefully send there one expedition after another. They have one goal - to make the legal relations in the Arctic similar to those in Antarctica, that is, international.

In this regard, the report published on June 23 by the Canadian Ministry of Defense that analyzes "the decision of Russia to form two teams to protect their interests in the Arctic, as well as its ongoing investigation of the seabed in this region" very revealing. According to experts quoted by National Post, this action "does not pose a threat to Canada."

The report says that despite the fact that many observers presented it in the press as a provocation by Russia in the Arctic, there are no serious causes for alarm. Russia has the right to deploy its troops anywhere on its territory.

Russia plans to build its first Arctic land Brigade by 2015, based in Murmansk, and by 2020 - 20 border crossing points, and give the Northern Fleet eight submarines of "Severodvinsk" class for the protection of the Northern Sea Route. "In the future, Arctic is a new theater of war. Therefore, the decision of the Russian leadership group to build a combat marine in the North is the right one," said the former Inspector General of the Ministry of Defense Admiral Ivan Kapitanets.

Canada is also planning to increase the military power in the region. The government of Stephen Harper first presented its project of the Arctic military development program in 2007. "Canada has a choice when it comes to protecting its sovereignty in the Arctic. We will either use it or lose", the Prime Minister said at the time. New Canadian Arctic fleet will cost the taxpayers 2.92 billion. Currently a powerful icebreaker worth 680 million dollars is under construction, as well as several patrol ships and a center for training soldiers for combat operations in the North.