The fate of nuclear Iran to be decided in Moscow

Another round of negotiations devoted to the Iranian nuclear program started in Moscow. There will be two packages of suggestions discussed during the meeting. The packages come from six mediators (five constant members of the UN Security Council - Russia, China, the USA, the UK, France and Germany) and from Iran. The goal of the meeting is to form or at least to outline a mutually acceptable solution of the problem. Russian diplomats hope that the meeting will finally give the entire process a go. However, experts are skeptical. They already discuss whether it would be possible to avoid another war in case of another failure at the talks. 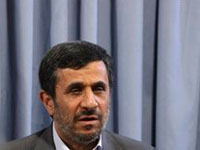 The six mediators will be conducting negotiations at The Golden Ring Hotel, right opposite the building of Russia's Foreign Affairs Ministry. In accordance with the compromise plan, Iran shall restrict the enrichment of uranium at the power station in Natanza from 20 to 3.5 or 5 percent. In addition, the country shall either completely freeze the enrichment works at Fordo underground factory or close the factory.

In return, Iran will be allowed to produce fuel rods for the research reactor in Teheran under the strict control of the IAEA - the country already has 145 kilos of enriched uranium for that. As soon as Iran begins to meet the requirements of the plan, the sanctions from the country will be lifted gradually.

IAEA experts have recently discovered traces of uranium at Fordo factory. The uranium was enriched to 27 percent. Iranian officials stated that the 20-percent level had been exceeded for technical reasons. They continue to insist that the Iranian nuclear program is peaceful.

The meeting in Moscow will be a decisive one. If the Moscow talks end with a failure, the USA intends to refuse from new negotiations with Iran. If it happens, the sanctions against Teheran will be toughened inevitably. What is worse, a military solution of the problem may get much more real.

Experts say, though, that one should not expect a breakthrough in the solution of the Iranian nuclear program during the talks. This will not be possible to achieve until June 2013, when Iran holds the presidential election.

The negotiations at the Moscow meeting may succeed, though. However, Western powers will take efforts to make the talks fail, Rajab Safarov, the General Director of the Center for Modern Iran Studies believes.

"If the talks are successful, this would imply an additional political bonus for Russia that has been demonstrating its positions in international politics more actively after Putin returned to the Kremlin. Western officials do not want any positive result at the Moscow meeting," Safarov said.

If the talks fail, Israeli "hawks" may take it as a signal to attack Iran. However, this may cause considerable damage to the image of the sitting US president. If Obama agrees to make concessions for Iran, his Republican rival Mitt Romney will use it immediately against him. Romney already stated that he was more concerned about Israel using military power against Iran rather than about an opportunity for Iran to turn into a nuclear power. Romney promised to attack Iran, if he is elected president.

It does not seem to be likely that Israel attacks Iran single-handedly. However, if Washington supports Israel, then the Iranian nuclear program may fall 5-7 years back. Israel will not be able to succeed alone at this point. If Israel attacks Iran, the whole Muslim world will become enraged, including the countries that do not support the Islamic Republic.