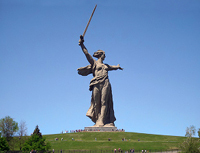 "The first 24 hours of the invasion will be decisive...the fate of Germany depends on the outcome...for the Allies, as well as Germany, it will be the longest day."             Field Marshal Erwin Rommel

On 6 June 1944 the armies of "Britain, the Empire, and America," supported by mighty naval and air forces, were hurled across the English Channel to exterminate Nazi tyranny.  During the preceding night paratroopers and glider-borne assault troops had boldly landed behind the invasion beaches.  Allied naval flotillas comprising 7 battleships, 25 cruisers, 105 destroyers, 4,021 landing ships, landing craft, and barges,  and with two prefabricated artificial harbors in tow,  were unchallenged by the meager German naval units remaining in occupied France.

The thousands of fighters and bombers of the western allies controlled the skies over the channel and far inland as well, making daylight movement by enemy ground units perilous indeed. This titanic endeavor was and remains history's greatest amphibious invasion.  But despite the overwhelming allied superiority on land, sea, and air, success was far from certain.  Realizing the invasion could fail, General Eisenhower famously prepared a message accepting responsibility for the defeat of Operation Overlord. Thankfully, that message proved unnecessary.

What many in the west fail to acknowledge is the central role played by the USSR in the allied victory on D-Day and throughout the war.  On 6 June 1944 nearly two thirds of the German Army was far from Normandy, on the defensive and hard pressed by the Red Army and Red Air Force.

As it had for Great Britain and would for the United States, World War II began disastrously for the Soviet Union.  Operation Barbarossa was launched on 22 June 1941 as Hitler's legions mounted their surprise attack.  Over the ensuing weeks and months stunning victories were triumphantly proclaimed from Berlin.  Entire Soviet armies, each composed of tens of thousands of heroic defenders of their fatherland, were annihilated.  Soviet civilians were murdered, starved, made homeless, and enslaved. Vast territories with immense agricultural, mineral, and industrial value fell to the invader.  Most senior British and American military officers concurred in the belief that Nazi Germany would certainly prevail and destroy the USSR.

What the Nazis had concealed however, when boasting of their triumphs, was their cost.  From the minute their soldiers violated the Soviet frontier, a high price was paid in blood.  As the aggressor advanced into ever stiffening Red Army defenses, the price went up.  Although the German victories were costly, their defeats came dearer.  By the time the Americans, British, and Canadians bravely stormed Normandy's beaches, their valiant Soviet ally had already won "crushing victories" at Moscow (1941 -  1942), Stalingrad (1942 -  1943), and Kursk (1943).

Millions of enemy soldiers had been killed, wounded, or taken prisoner by the Red Army before D-Day.  The fallen, along with those still fighting on the eastern front, could not defend their Reich against the onrushing waves of Anglo-Americans coming ashore in France.  A great Red Army summer offensive, Operation Bagration, erupted on 22 June 1944.  This gigantic offensive "included 14 combined-arms armies, 1 tank army, 4 air armies, 118 rifle divisions and two rifle brigades (most organized into 40 rifle corps), 7 fortified regions, 2 cavalry corps (with 6 cavalry divisions), 8 mechanized or tank corps (4 of which were separate corps) and scores of supporting artillery formations.  The total combat force involved was 1,254,300 men, including 4,070 tanks and self-propelled guns, 24,363 artillery pieces, and close to 5,327 combat aircraft." Operation Bagration, together with the relentless, day and night strategic bombing campaign of the Americans and British, left the architects and builders of Treblinka and Auschwitz little chance to reinforce their units in Normandy.

The end came finally on 8 May 1945, less than one year after D-Day, as "representatives of the German command signed the Act of Unconditional Surrender, thus acknowledging their total defeat."

"German armed forces' losses to war's end numbered 13,488,000 men (75 percent of the mobilized forces and 46 percent of the 1939 male population of Germany).  Of these, 10,758,000 fell or were taken prisoner in the East." For the hard won allied victory, our Soviet comrades-in-arms made by far the greatest sacrifice.  "One can look at it this way: for every Briton or American who died, the Japanese lost seven people, the Germans twenty, and the Soviets eighty-five."

In reflecting on the terrible specter of a possible victory for Hitlerite Germany, eternal gratitude and respect is due to all on the allied side who fought, suffered, and "stood unto death," not forgetting our gallant allies in Russia and the former Soviet Union.