U.S. Senator John McCain believes that "the law of Magnitsky" will be tied to the repeal of the Jackson-Vanik amendment. It is obvious that the U.S. considers this bill as a means of putting pressure on Russia.

"This law will be tied to the repeal of the Jackson-Vanik amendment. Sometimes in history there are turning points. And I think that Magnitsky murder was this moment for the American and world public opinion,"   John McCain said in an interview with radio station "Voice of America." 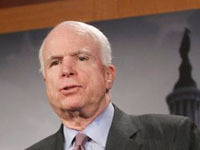 The bill "Justice for Magnitsky" was originally introduced to the U.S. Congress by Senator Benjamin Cardin and Congressman James McGovern in April of 2010. The Bill introduced a prohibition on entry into the United States and financial transactions to individuals, who, as the authors of the bill believe, are involved in the death of a lawyer Magnitsky in jail. The list includes over 60 people.

The bill has been sitting in Congress for two years, and it is hard to say when it would be considered. McCain is not the only one who thinks that "the law of Magnitsky" should replace the Jackson-Vanik amendment. The bill is a good tool for a certain pressure on the administration of Barack Obama (who insisted on the abolition of the amendment by the end of the year).

The sincerity of the U.S. lawmakers is questionable due to the fact that the liberal part of the non-system opposition insists on the adoption of "black lists" of the Russian officials.

Chief Editor of "Political Class" Vitaly Tretyakov said that the Americans will "never accept Russia as an equal partner because Russia is not the Soviet Union." Therefore, he argues, "the law of Magnitsky" - as well as the Jackson-Vanik amendment - is clearly "an anti-Russian thing." According to Tretyakov, it can always be avoided if the relations between the two countries are improving. But if these relations are not the best, then "this is a hook prepared by the US for Russia."

General Director of the Center for Political conjuncture Sergei Mikheyev, in turn, suggests that McCain's statement will have no specific impact. "It is clear, however, that he speaks for a specific part of the U.S. government, the American ruling class," he said to "Pravda.Ru."

According to Mikheev, "the goal is really to put pressure on Russia by any means." "Magnitsky - great, the Khodorkovsky case - wonderful, Chechnya - even better. In fact, the reason does not matter, the principle is important. The principle is - either Russia does everything required by the United States or the United States puts pressure on Russia by all means and under any pretext. In this case, Magnitsky is nothing more than an excuse. That's all. This is a position of at least part of the ruling class of America, and McCain is their spokesman," said Sergei Mikheyev.

The U.S. State Department has compiled a list of Russians, who, in connection with "the case of Magnitsky," are denied entry into the United States. It, however, is several times shorter than the "Cardin list." In turn, the Russian Foreign Ministry has made its own list that includes U.S. officials.

The Russian Foreign Ministry has repeatedly stressed that Moscow will not disregard the initiative of the U.S. legislators regarding any restrictions on the rights of Russian citizens charged with any offense not confirmed by the court.