Putin: "I consider it to be my life mission to serve my motherland"

Assuming the President's office, Vladimir Putin announced that he understands his responsibility to the country and promised to justify the trust of the citizens.

"I think the meaning of my life is my duty to serve the motherland, our people, whose support has inspired and helped to solve the most difficult and complex tasks", Putin said, noting that Russia's interests, security and well-being of its citizens have always been and always will remain above all for him.

"Together we have traveled a long and difficult way, believed in ourselves, in our power, strengthened the country and regained the dignity of the great nation. The world saw a revival of Russia, and this is the result of the efforts of our people, a sum total of the hard work and everyone's personal contribution. Today we have everything to move forward, to build up: a capable and growing state, a strong economic and social base, active and responsible civil society", Putin said, adding that he sees great merit of Dmitry Medvedev in that. "His presidency has provided the continuity and sustainability of the country, gave a further impetus to the modernization of all aspects of our lives. He has very difficult and important tasks ahead of him," he explained.

According to Putin, today Russia is entering a new stage of the national development, and "we need to solve the problems of a completely different level, quality and scale." "The coming years will be decisive for the fate of Russia in the decades ahead. We all need to understand that the life of future generations, the historical perspective of the state and our nation depends on us today, namely, on the real progress in creating a new economy and modern standards of living, on our efforts to save the people and support Russian families, on our insistence in setting up vast Russian spaces from the Baltic to the Pacific Ocean, on our ability to become leaders and the center of gravity of the entire Eurasia ", Putin said. 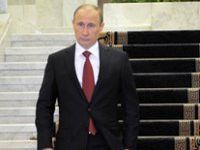 The President expressed confidence that Russia will "achieve its goals if we are united people, if we appreciate our motherland, strengthen the Russian democracy, constitutional rights and freedoms, expand participation of citizens in the management of the country, formulation of the national agenda,   to ensure that everyone's striving for the better life is implemented in the combined work for the success of the entire country. We will be successful if we use the strong basis of the cultural and spiritual tradition of our multinational state, our history, and our values that have always been the basis of our life. If everyone lives conscientious live filled with faith and love for the motherland, family, cares about the happiness of their children and well-being of their parents," said Putin.

Vladimir Putin declared that "we want and live in a democratic country where everyone has the freedom and ability to apply their talent. We want to live in a successful Russia respected worldwide as a reliable, open, fair and predictable partner. I believe in the power of our common goals and ideals, our determination to transform the country through the combined actions of our citizens in our common desire for freedom, truth and justice. We are ready for future tests and future challenges. Russia has a great history and no less than a great future. We will work with faith in our souls, with sincere and pure thoughts," he concluded.

The inauguration ceremony in St. Andrew's Hall of the Grand Kremlin Palace began with a solemn introduction of the National Flag of Russia, the Standard of the President, the Russian Constitution and the Seal of the President of Russia.

President-elect took the oath of allegiance to the people of Russia. The Chairman of the Constitutional Court Valery Zorkin announced the introduction of Vladimir Putin as head of the Russian state.

In addition, a farewell speech was made by the last President Dmitry Medvedev.

Three thousand people were invited to the inauguration ceremony. Among them are the members of the Government and the Federation Council, State Duma deputies, judges of the Constitutional Court, and representatives of other federal government agencies.