On May 5th, 2012, the newspaper Pravda, which was listed as one of the world's leading publications of the 20th century, marks its 100th anniversary. Pravda.Ru is directly relevant to the newspaper. As a result of the tragic end of the "mouthpiece of the Kremlin" in 1991, the editorial staff of the newspaper split into three newspapers in 1991-1997. One of the "Pravdas" became an online publication after 1998 titled Pravda.Ru. 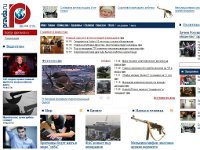 Pravda.Ru appeared online for the first time on January 27th, 1999. It became the first independent social and political online newspaper in Russia's history. Today, Pravda.Ru remains the largest and state-of-the-art electronic publication. Nevertheless, keeping up with times, the staff of Pravda.Ru has always maintained the connection with the traditions of the chronicler of the 20th century, the print newspaper Pravda. This is a contribution to respect the history of our country, the newspaper Pravda and the wonderful people who worked at its offices during various years.

Mikhail Poltoranin, the former Vice Prime Minister and special correspondent of the newspaper from 1975 to 1986 said that the newspaper was "like a social and political elevator, when Pravda was pulling people up from the bottom." Mr. Poltoranin soon became known as a "staff killer."  "I'd take them by the balls," he said. As many as 197 officials had been jailed after the publications of Poltoranin's materials.

Nowadays, many people say that Pravda was only publishing the materials approved by the Central Committee of the Communist Party. However, the former employees of the newspaper, or the Pravdists, as they call themselves, say that their newspaper was the freest publication in the Soviet Union.

Yevgeny Primakov, who worked at Pravda from 1962 till 1970: "Of course, we would be given directions from the top. I once wrote a series of articles with Igor Belayev about Egypt's defeat in the six-day war. We named the reasons that led to Egypt's defeat - the new military bourgeoisie that started pursuing its own interests. Pravda published the articles, although it came into conflict with the idea of the non-capitalist way of development and the socialist orientation. One of the authors of the socialist orientation, Professor Ulyanovsky, disliked us for that bourgeoisie. He wrote a note about us, in which he accused us of all mortal sins. We came out as the winners, though. A Soviet ambassador once visited Gamal Abdel Nasser (Egyptian President in 1956-1970 - ed.) after Nasser had been informed about our articles. Nasser told the ambassador that we had given the correct assessment of the situation in Egypt. The ambassador reported that to the Soviet administration, so we took a breath of relief."

"The freedom at the newspaper and the understanding of its role as the main newspaper of the country was teaching us immense responsibility for the words that we were writing - for every word and every phrase," Primakov added.

Sergei Filatov (served at Pravda from 1973 till 2000) came to the newspaper as an intern. Years later, he became the President of JSC Editorial Office of Newspaper Pravda.

Sergei Filatov: "There was that guy, Alexander Kuzmishchev, who came to Pravda after he graduated from the department of international journalism. He was a very ambitious young man and he was so eager to see his articles published. The administration believed that he was too young for that. So two of our young employees - Nikolai Miroshnik, our correspondent in Italy and Greece, and Vladimir Shelkov - decided to play a joke on Kuzmishchev. On his behalf, they wrote a commentary which was titled "In Blood Up To The Belly." The article was about Somos, a Nicaraguan dictator. They brought the article to the office dossier. They wrote nothing but rubbish there, but the office started checking the information. The story triggered a huge scandal in the office because they quickly realized that the information in the article was not true to fact. Kuzmishchev said, of course, that he had not penned the piece. The story had a happy ending, though. Alexander was given a chance to publish his work the next day."

Filatov recollected a story about Joseph Stalin, who was very well aware of the structure of the newspaper. Stalin once rang copy editor Semyon Solovyov and wondered what Pravda's next issue was going to publish. "Hello, what is the next issue of Pravda going to have?" he said. Solovyov said: "Who is it?" And heard the voice responding: "This is Stalin bothering you." "What? What kind of Stalin are you! Don't play jokes with me!" the editor said and hung up.

A little bit later, the copy editor was asked to go to the office of the editor-in-chief, where he had to answer the call again. Solovyov put the receiver to his ear and heard: "This is Stalin. What is Pravda going to have tomorrow?"

The newspaper was going through different tests together with the whole country. They even tried to burn out the truth from the newspaper pages once. Vladimir Gubarev (the head of the science department of Pravda in 1985-2001 -ed.) was the leading journalist of one issue. He decided to publish a translation of the article about Boris Yeltsin's visit to the United States. When "everything exploded" the next day and people were burning Pravda on Pushkinskaya Square, Mr. Gubarev offered the people to burn him too because he was the person who published the article.

"First off, and this is an astounding phenomenon - people never take the truth at once. Secondly, there was nothing to play on. Yeltsin's team had no ideas. Yeltsin's policies and the policies of that time were based on the things that people had to pay for for many years afterwards," Gubarev said.

The newspaper Pravda was related to many large-scale events in the country.  "Pravda was like a mirror - it was reflecting time. It was the Soviet time - the great, the tragic, the miserable and the outstanding time. One only needs to understand that. Pravda had the people who'd jail others and who'd be jailed. Pravda had the people who'd execute others and be executed. One can not judge the past from the point of view of the present," Vladimir Gubarev said.