US human rights organization Freedom House has published another annual report about the freedom of speech in the world. 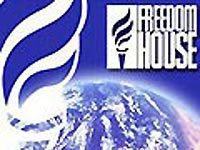 According to Freedom House, whose budget is presumably based on the grants from the US government, the state of affairs with the freedom of press did not worsen in 2011 for the first time in eight years.

As for Russia, the organization placed the country on the 172nd place on the rating. That was quite an "achievement" taking into consideration the fact that Russia was ranked 173rd in the previous FH report. US human rights activists placed Zimbabwe and Azerbaijan next to Russia.

The authors of the rating believe that the court system in Russia was designed to persecute journalists. In addition, the report pointed out the impunity for attacks against journalists and their murders. To crown it all, the report said that the state was controlling the majority of traditional media outlets in the country.

The state of affairs with the freedom of press in Russia was improving owing to the development of the Internet, social media and satellite television, the report said.

"This rating has been rubbish before and it remains so now. What can I comment here? This is absolute rubbish," Valery Fadeev, a member of the Public Chamber of the Russian Federation, editor-in-chief of Expert magazine, told Pravda.Ru.

"It is ridiculous that there are 171 countries in the world where the situation with the freedom of speech is better than in Russia. This is completely absurd," Fadeev said.

"As for the Internet, the USA has more restrictions than Russia does now. I do not even know whether we have any restrictions or censorship for using the Interne.t I can not think of any, except for those regulated by law - of course, it goes about the propaganda of violence and pedophilia. I do not know any other restrictions," he said.

"It is idiotic to praise Russia for having more blogs, as if there were none last year," he added.