May 2nd, Wednesday, was the last day, when Dmitry Medvedev had a meeting with the leaders of parliamentary factions as the President. Medvedev signed the law about the elections of the governors and relieved the parties of the need to collect signatures. He also set out his readiness to continue working with all parliamentary factions "in the new format." 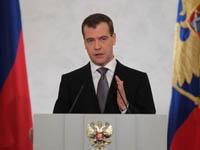 When opening the meeting, the president congratulated all of its participants on the May Day, which Russia celebrated on May 1st, and on the upcoming great holiday - May 9th, the Victory Day. Medvedev then said that the State Duma had passed more than 200 president's laws during the recent four years. "They did not receive universal support, but even critical remarks helped us elaborate a more constructive position," he said.

According to the president, the constructive cooperation with the State Duma made it possible to solve such complicated questions as the problems of the social and economic development under the conditions of the global crisis, the struggle against corruption and political reforms.

Medvedev said at the meeting that he had signed the law about the gubernatorial elections in Russia. The law had already been approved by the State Duma and the Federation Council.

In accordance with the law, the president determines the need and the procedure for consultations about the candidates. The consultations will be conducted both with the parties, which nominate their candidates, and with the individuals who nominate themselves. The gubernatorial hopefuls will have to win the support from five to ten percent of deputies of representative bodies of municipal institutions and/or elected heads of municipalities of Russian Federation entities, who represent not less than three-thirds of municipal areas and districts of certain regions.

The possibility for self-nomination for the position of governor will be determined by regions. Self-nominated candidates will have to collect from 0.5 to 2 percent of signatures in their support to be registered for the election.

In addition, the president signed the law to relieve political parties of the need to collect signatures at the elections of all levels, except for presidential ones. As for the presidential election, the quantity of signatures will be considerably lower as well (from 2 million to 100,000, for instance).

Medvedev also said that he was determined to continue his work with all parliamentary factions "in new formats" in case he becomes the prime minister. It is worthy of note that the State Duma will consider the questions about the appointment of the prime minister on May 8th.

It is an open secret that outgoing President Medvedev is to become the head of the Russian government. Communists and Just Russia party will most likely vote against Medvedev. Communist leader Gennady Zyuganov said that the CPRF will not vote for Medvedev, nor can it vote for any other candidacy that is connected with the current political course.  The party is not going to nominate its own representatives in case the political course of the country changes. It is worthy of note that the Communist Party, as a member of the State Duma, supported only one candidate for the position of the prime minister - Yevgeny Primakov.

As for Just Russia, party leader Sergei Mironov stated that his organization would not support the candidate who wants to become both a member and the chairman of United Russia.

The Liberal and Democratic Party of Russia, which supported Putin in 2008, will vote for Medvedev. Therefore, taking into consideration the position of the ruling party, Dmitry Medvedev, the outgoing president, will become the head of the Government of he Russian Federation on May 8th.