After farewell meeting with Obama, Medvedev flies to India

Russian President Dmitry Medvedev is going to New Delhi for the meeting of the BRICS leaders. Medvedev is flying to India after the Nuclear Security Summit in Seoul and the "farewell" meeting with Barack Obama, RIA Novosti reports with reference to the press service of the Kremlin. 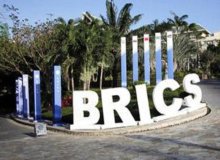 BRICS incorporates five leading developing countries in the world: Brazil, Russia, India, China and South Africa. The fourth summit of the association is opening Wednesday. However, it transpired that two key members of the association - China and India - see each other as potential adversaries, the Kommersant newspaper said.

Experts say that BRICS remains an economic alliance, although there are too many problems between the members from the political point of view. It is worthy of note that Russia speaks about the so-called "Chinese threat" very often as well.

It is generally believed that China is becoming a superpower of the 21st century. The Celestial Empire leaves India behind on all key indexes. China's GDP is four times as much as that of India. It goes about $7.3 trillion vs. $1.8 trillion. As for arms purchases, India has recently taken the lead of China, but this is a weak consolation. Beijing has cut its arms deals because the Chinese started to make their own weapons more actively.

China and India were at war with each other in 1962. Beijing took the north-eastern area of Kashmir under control. The territorial dispute still remains open.

The "Chinese threat" is an actual subject for Russia as well. The authors of Russia's Strategy 2020 have recently included China on the list of strategic threats that Russia had to deal with. Experts said that when Vladimir Putin returns as president, he should look closer to Europe in terms of foreign policy.

China's global positions will only be growing in the future. The yuan has all chances to become an international currency by 2020. This and many other trends will be quite a challenge not only for Russia, but for the whole world. Chinese goods will continue to oust Russian goods from the domestic market in the near future. Beijing will also strengthen its positions at the IMF and the WTO, which may create serious obstacles for Russia in those organizations.

Vladimir Putin, who will become Russia's President in May, wrote in his pre-election article that the cooperation with the BRICS partners was a priority for the Russian Federation. Putin set out a hope that the alliance of developing states would begin to play a more important role in world economy and politics.

The unique structure established in 2006 symbolizes transition from the unipolar world to a fairer world order. The organization unites five countries with the total population of nearly 3 billion people. With South Africa joining the alliance, BRICS accounts for 25 percent of the global GDP, Putin wrote in his article.

According to Russia's president-elect, its takes time for the BRICS partners to get to work in this format. They need to get used to each other, Putin believes. However, when they finally give it a full throttle, their influence on international economy and politics will be highly important, Putin said.

Indeed, experts acknowledge that the countries of the alliance move to higher levels of influence. Finance ministries, ministries for economy, agriculture, and other structures responsible for national security already cooperate with each other within the framework of BRICS.

For the time being, BRICS de facto participates in the search for new forms of global regulation. The alliance works within the G20 and cooperates with the G8.