Russia finally has Bulava ICBM, after 14 years of tribulations

It seems that the longest spic story in the history of Russian missile technologies is drawing to an end. Defense Ministry officials stated that the Bulava ballistic missile would be passed into service for the Russian Navy in October 2012. Nuclear submarines of Project 955 Borei - Yury Dolgoruky and Alexander Nevsky - will be passed simultaneously with the missile. 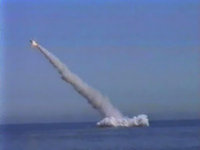 If all goes well, the intercontinental ballistic missile Bulava will become the basis for the naval component of Russia's nuclear triad. The state flight tests of the new missile system have ended successfully, Defense Minister Anatoly Serdyukov stated.

The most recent test launch of the missile was conducted on December 23, 2011 from the Yury Dolgoruky submarine. A series of Bulava launches is expected to take place in the summer of the current year. The launches will be conducted within the scheduled procedure to pass the new system into service.

Why did it take so long, though? The development of the new missile started in 1998. Viktor Romadin, a Candidate of Technical Sciences, shared his thoughts about it with Pravda.Ru.

"The story of the idea about the creation of the new missile for the Russian Navy was a curious one. I have been watching the development of Bulava's history for years. I came to conclusion that all of those failed launches occurred for organizational, rather than technical reasons.

"The Bulava, a hard-fuel ballistic missile of D-30 complex was designed to be mounted on board 955 Project submarines. The works on the missile began in 1998 at the Moscow Institute of Heat Engineering that created the remarkable Topol-M missile system in 1989-1997. Please note that the Topol-M is a ground-based missile, although it is a remarkable one indeed. The Institute did not have much experience in building sea-based missiles, not to mention the missiles that are launched from under the water.

"In November 1997, then-Prime Minister Viktor Chernomyrdin received an official letter signed by ministers Yakov Urinson and Igor Sergeyev. In the letter, the ministers said that the Heat Engineering Institute should perform the function of the leading organization in designing prospective means of nuclear deterrence. For some reason, the order for the sea-based missile was given to the organization that specialized in designing ground-based hardware. Roscosmos, the federal space agency, was not involved in the development of strategic missile complexes for the navy.

"Figuratively speaking, the Defense Ministry asked the Heat Engineering Institute to take its Topol-M missile and mount the "cool" missile on board nuclear submarines. It seems that the Russian government made that strange decision at the end of the 1990s under the influence of some mysterious factors. In 2000, when Russia elected the new president, it was too late to change anything about that decision - a lot had been invested in the project by that time.

"It took Russia 14 years to finish the project off. This is a very long time for the defense industry. That was the time when the country was in the process of decommissioning outdated naval missiles. The security of the country was therefore jeopardized.

"It is hard to judge who was right and who was wrong in this story. Was it because of someone's financial interests or corruption? Everything is possible. I personally believe that it was all because of our Russian slackitude."